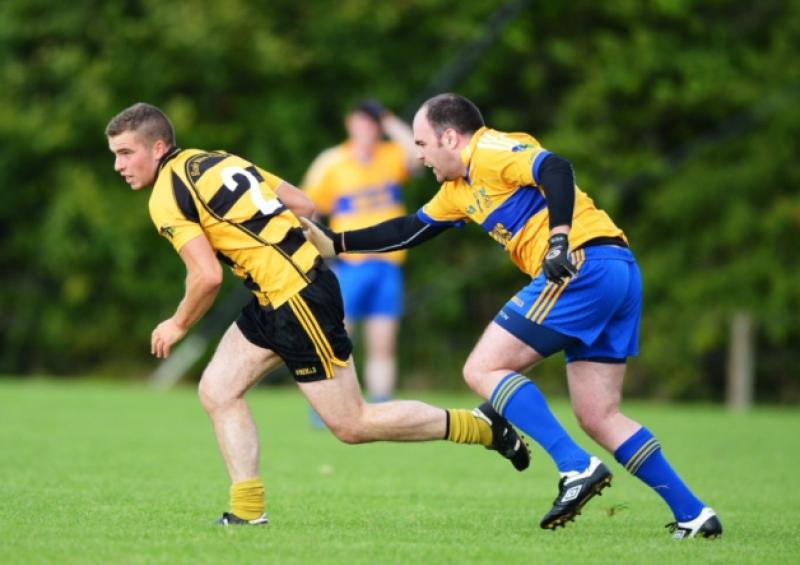 Carrickedmond were far too good for a poor Ballymore side as they advanced to the semi-finals of the Intermediate Football Championship by topping the group stage table.

Carrickedmond were far too good for a poor Ballymore side as they advanced to the semi-finals of the Intermediate Football Championship by topping the group stage table.

There was only five points separating the sides at the break but Carrickedmond stepped up another couple of gears in the second half to run out easy winners.

Five unanswered points from Tom Cummins (free), Jonathan Keegan, John Burns (2) and Marty Mulvey put Carrickedmond ahead by six by the 28th minute but just before the break Bernard McElvaney fired over a free for his side.

The second half was a completely one-sided contest as impressive Carrickedmond swept aside Ballymore’s weak challenge. With six minutes gone on the changeover Carrickedmond got their first goal through John Lenehan.

Two fine points from Jonathan Keegan was followed up by an excellent effort from Francis Kelly. That lead was stretched further in the space of two points when John Lenehan and Marty Mulvey landed a point apiece. Ballymore’s only response was a Bernard McElvaney free.

A well-worked goal from Jonathan Keegan in the 43rd minute put Carrickedmond ahead by 15 points. Ballymore did manage to get a consolation goal in the 48th minute when Kiel Dempsey slotted the ball to the net.

Carrickedmond then took control again. A fine point from wing-back Padraig McGrath was followed up by a John Burns free and Jonathan Keegan then tagged on another score. Four minutes from the end Carrickedmond got their third goal through substitute Niall O’Farrell and then Marty Mulvey fired over another point. Ballymore now face into the relegation play-offs while Carrickedmond can look forward to a semi-final clash against Rathcline.