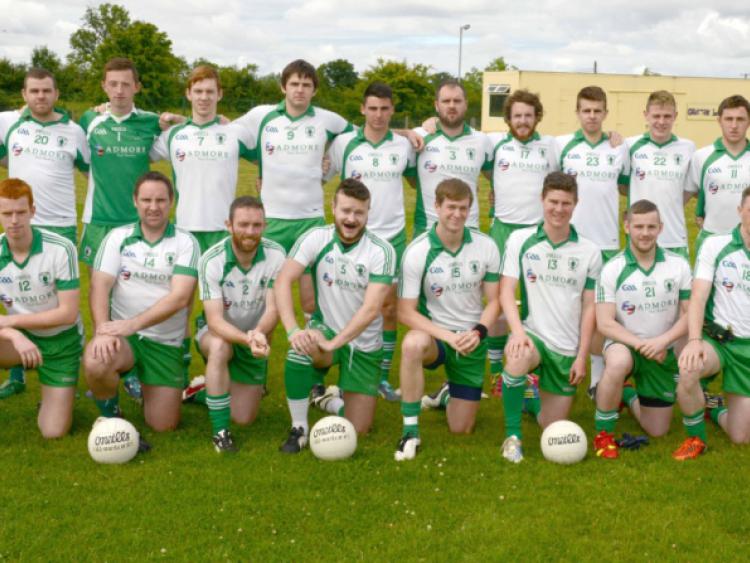 After capturing the Reserve League Division 1 title the previous week, Killoe achieved another success on Sunday last when they proved far too strong for a generally youthful Clonguish side in the Senior â€˜Bâ€™ Football Championship Final at the Young Grattans GAA grounds.

After capturing the Reserve League Division 1 title the previous week, Killoe achieved another success on Sunday last when they proved far too strong for a generally youthful Clonguish side in the Senior â€˜Bâ€™ Football Championship Final at the Young Grattans GAA grounds.

Emmet Og were winning this â€˜second stringâ€™ competition for the second year in a row and emerged victorious with considerable ease, mainly due to the scoring quality of impressive corner-forward Larry Moran who clocked up 3-2 in tormenting the opposing defence.

Moran fired home a couple of goals in the first half, the second of which was a cracking strike, and from the moment Joe Oâ€™Brien had a penalty well saved by the Killoe keeper Shane Fitzpatrick in the 9th minute it developed into a fierce struggle for Clonguish who trailed by 2-9 to 0-5 at the break.

And things got even worse in the second half as they ended up losing by the wide margin of 18 points with Killoe adding another two goals to their most emphatic tally.

There was no stopping midfielder Paddy Thompson as he burst his way through to rattle the back of the net in the 43rd minute while Larry Moran completed his hat-trick when driving a low shot past veteran Clonguish keeper Martin McHugh in the closing minutes of this very one-sided encounter.

Former Leitrim netminder McHugh made a few fine saves during the course of the game with the Clonguish defence coming under a lot of pressure as Liam Hughes and Paddy Thompson gave Killoe a decisive edge at centrefield. Young Hughes was particularly prominent and also got in on the scoring act - firing over three points from well struck 45â€™s.

The game was tight enough in the early stages but it soon became clear that Killoe - backboned by some strong regrades - were the superior side and they gradually pulled away.

Ronan McGoldrick set up Larry Moran for the opening goal in the 8th minute while the nine Emmet Og points in the first half were registered by Shane Clarke, McGoldrick, John Kiernan (2), Liam Hughes (2), Moran and Daniel Mimnagh while Joe Oâ€™Brien got three scores (two frees) for Clonguish with Alan Gregg and Ciaran Williams also on target.

It was the strong running of Liam Hughes that created the opening for Larry Moran to plant an unstoppable shot into the roof of the Clonguish net in the 17th minute and Killoe continued to dominate on the changeover. Clonguish brought on Paddy Dowd at half-time in an attempt to improve matters, and he did succeed in landing a fine point in the 36th minute, but the best they could do thereafter was just three more scores from frees converted by Joe Oâ€™Brien (2) and Christopher Gordon.

Rampant Killoe registered a further 2-6 in the second half, the points coming from Daniel Mimnagh (free), Ronan McGoldrick (2), Liam Hughes, Larry Moran and defender Damien Bratten with the captain surging forward to land a terrific long range kick close to the finish - much to the sheer delight of the Emmet Og supporters.