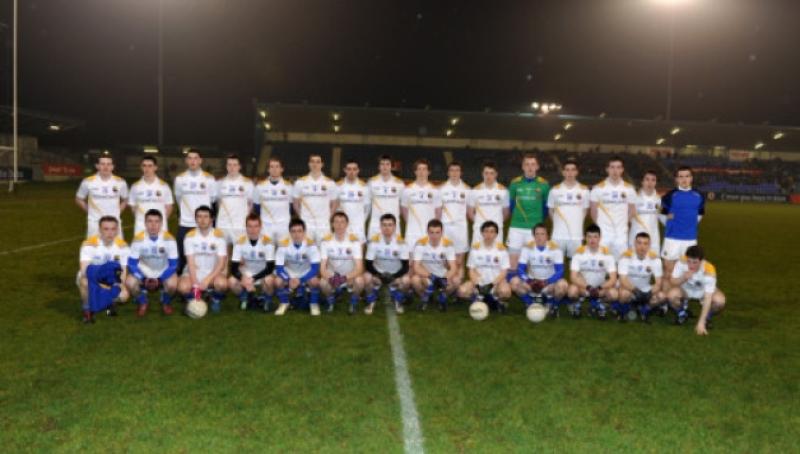 A magnificent performance full of heart and determination saw the Longford U-21 footballers spring a massive shock to knock reigning Leinster and All-Ireland Champions Dublin out of the 2013 provincial championship in difficult conditions at wet and windy Parnell Park on Wednesday night of last week.

A magnificent performance full of heart and determination saw the Longford U-21 footballers spring a massive shock to knock reigning Leinster and All-Ireland Champions Dublin out of the 2013 provincial championship in difficult conditions at wet and windy Parnell Park on Wednesday night of last week.

In a sensational success Eugene McCormack’s side were deserving of their famous victory in the quarter-final but they know they need to build on this win. Wexford await in the semi-final, the county who beat them two years ago in the Leinster U-21 decider, and the eagerly awaited last four clash is currently fixed for O’Moore Park, Portlaoise on Wednesday evening next, March 20th, throw-in 7.30pm. Venue to be confirmed.

Wexford showed a lot of character to beat a strongly fancied Westmeath side after extra-time in their quarter-final tie at the St. Loman’s GAA grounds in Mullingar last week and their challenge certainly cannot be taken for granted even if they are something of an unknown quantity.

Sport is about the lasting belief that somewhere down the line glory awaits; sometimes the outsider wins and the underdog refuses to lie down. That’s exactly what happened in Donnycarney, North Dublin last week. Longford had the belief that they could cause a massive shock and they got a rich reward.

There were heroes all around the pitch but two players who really stood out were defender Barry O’Farrell who was exceptional in his marking of the Dublin dangerman Ciaran Kilkenny and also forward Robbie Smyth who scored the decisive goal in the 53rd minute that set Longford up for this wonderful win.

Longford had to play out the final few minutes with 14 men after Padraig McCormack received a second yellow card; it was a harsh decision because his first booking seemed to be a case of mistaken identity. Dublin could have snatched a dramatic draw right at the end when Ciaran Kilkenny had a chance to level matters but he blasted his free high and wide and seconds later the final whistle was blown to spark off jubilant scenes.

The large and vociferous crowd from Longford meant that it was more like a home game for them than Dublin who were really outnumbered. The away supporters really got behind their team and no doubt it was a vital factor in the eventual outcome.

Longford started the game in a very positive manner but for all the possession they enjoyed they failed to put many scores on the board. It was Robbie Smyth who opened the scoring in the 4th minute after receiving a neat pass from Daniel Mimnagh and Longford then kicked three wides in a row in a dominant spell.

The next score of the game didn’t come until the 18th minute and it was a well-worked Longford move. Darren Gallagher did well to win the ball, he played it to Paddy Thompson who in turn found James McGivney, and the St. Columba’s man laid it off to Rory Connor who fired over a nice point.

Seconds later Longford had a chance to register their third point on the board but Mark Hughes free was off target; their fifth wide of the game. Out of nothing Dublin got right back into the game and took the lead through a Ciaran Kilkenny goal in the 19th minute.

Corner-back Ross McGovern then popped up in the 24th minute to register their first point. Robbie Smyth was unlucky with his effort minutes later before Dublin forward Paul Maguire missed a clear-cut goal chance when it was easier to score.

Trailing by two points, 1-1 to 0-2, at the break, Longford made a great start to the second half and within seconds of the resumption had cut the gap to one; Robbie Smyth converting a free. Longford then hit two more wides in a row as they failed to put away the decent chances they created.

A well-taken ’45 from Shane Carthy restored Dublin’s two point advantage in the 38th minute but Longford kept plugging away. Points were then traded between Robbie Smyth and Ciaran Kilkenny (free) before a Mark Hughes free put Longford back to within one in the 48th minute.

The final 10 minutes belonged to Longford as they really upped their game and showed serious spirit character. Seven minutes from time Hughes found Smyth and the Abbeylara lad made no mistake in finishing the ball to the net to give Longford a two-point advantage.

A point from wing-back Diarmuid Cooney put three between the sides one minute later but Dublin staged a determined late rally. Substitute Gavin Ivory pointed in the 55th minute before Longford captain Padraig McCormack was sent-off. Ivory was again on target in the 59th minute to close the gap to the minimum of margins before Dublin had a chance to claim a dramatic last gasp equaliser but a free taken by Ciaran Kilkenny was off target and the Longford bravehearts held out for a memorable win.