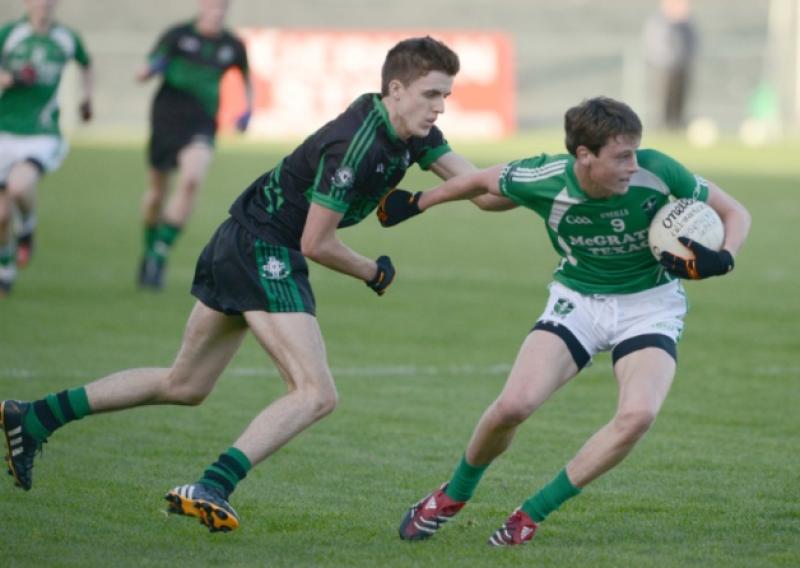 Clonguish Og and Northern Gaels will have to do it all again this weekend after the sides played out a pulsating Minor ‘A’ Football Championship Final which ended in a draw at Pearse Park on Saturday evening last.

Clonguish Og and Northern Gaels will have to do it all again this weekend after the sides played out a pulsating Minor ‘A’ Football Championship Final which ended in a draw at Pearse Park on Saturday evening last.

Truth be told, the Clonguish minors are probably wondering how they were denied victory when on the brink of producing a major shock and it must be said that Northern Gaels were lucky to snatch a second chance with the replay set for Saturday next at Pearse Park, throw-in 4.15pm.

For long spells, Clonguish were the better side, helped greatly by the free scoring exploits of accurate forward Alan Gregg. The lively corner forward was a thorn in the side of the defending champions throughout with the Clonguish number 15 clocking up the impressive total of eight points (seven frees).

Indeed it was Gregg, buoyed on by a strong wind, who kept the scoreboard ticking over through much of the first half, two of which came inside the opening ten minutes.

Colin Farrell and midfielder Peter Hanley were the others to get in on the scoring act as Clonguish opened up a four point lead by the 11th minute.

Northern Gaels fans were made to wait until ten minutes later to see their side register their first score, courtesy of a David McGivney free.

The county minor star added another soon after, but that was it for a forgettable opening half hour for the Harte Cup holders.

Two further Alan Gregg scores, the latter a superbly struck 45’, sent the underdogs into the dressing room at half-time 0-6 to 0-2 in front and firmly in the ascendancy.

But all that was to change in the second half. Whatever the Northern Gaels management team said to their charges during the interval, it quickly reaped dividends with the stiff wind now in their favour.

First, David McGivney sent another booming free over the posts while the pacey Rian Brady added his name to the scoresheet seconds later.

Gregg and McGivney then swapped scores before McGivney reduced the deficit to the minimum of margins (0-7 to 0-6) with just under ten minutes gone in the second half.

With their tails up and appearing a much more cohesive unit at this stage, Northern Gaels levelled the scores a minute later. Not surprisingly, it was McGivney who was the orchestrator, again from a well struck free.

That you would have thought was that. But back came a gritty Clonguish side, whose never say die attitude had to be admired.

And like McGivney for the Gaels, it was that man Alan Gregg doing the damage for Clonguish. A brace of Gregg frees edged Clonguish ahead once more, points which were later cancelled out by Gaels corner-back Cian Brady and attacker Rian Brady.

It was Rian who then put his side into the lead for the first time with just five minutes left as Northern Gaels sensed victory was now well within their grasp.

But Clonguish tied things up once more through Colin Farrell before that man Gregg notched his eighth score to put his side so close to a famous victory.

But as stoppage time approached, David McGivney showed remarkable composure to slot over a 45 yards free to level matters once more but Clonguish were furious as they felt the referee Hugh O’Kane should have awarded a free out instead - the general opinion - and the whistle blower was subject to a lot of criticism for his handling of the game.

Harsh on Clonguish who should have won and the firm favourites Northern Gaels, after this fortunate escape. will probably succeed at the second attempt. That remains to be seen!

Who will win the