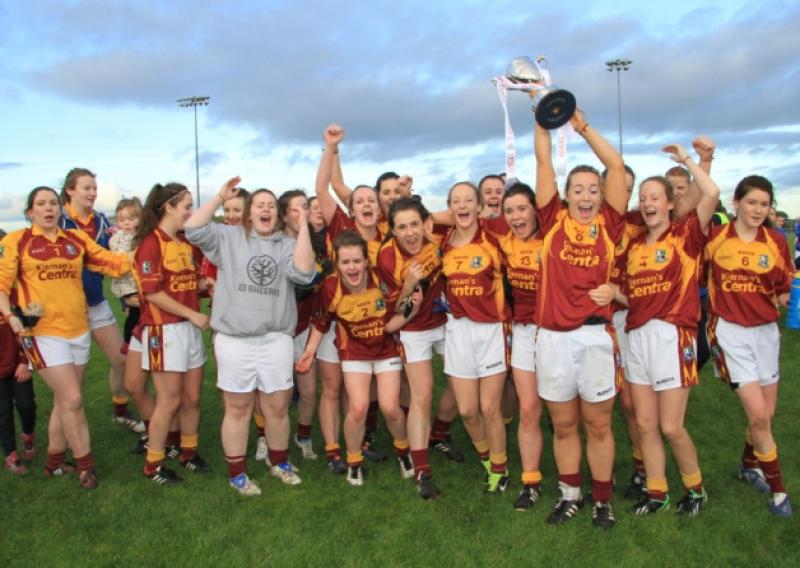 Coralstown GAA Club Kinnegad was the venue for the much anticipated clash between St Helen’s of Longford and Monasterevin from Kildare in the Tesco Leinster Junior club championship final on Sunday last, and both sides did not disappoint the large contingent of supporters that had made the journey to Westmeath.

Coralstown GAA Club Kinnegad was the venue for the much anticipated clash between St Helen’s of Longford and Monasterevin from Kildare in the Tesco Leinster Junior club championship final on Sunday last, and both sides did not disappoint the large contingent of supporters that had made the journey to Westmeath.

While the sides were level with only seconds left in the game (3-10 to 2-13 ), the Longford side were thrown a life line when Monasterevin’s top scorer and player of the match Simone Bell who had a personal tally of 1-13 failed to convert the last free of normal time to send the game into extra time.

Both sides exchanged scores in the first half of extra time with just a single point between the sides going into the final period (3-13 to 2-15) and despite having their captain Orla Noonan sent to the sin bin in the final minute, St Helen’s managed to hold on to their one point winning margin.

From the initial throw in both sides swapped scores with Emma Farley opening St Helen’s account with a well struck point in the first minute of the game, Monasterevin’s number eleven Simone Bell responded tapping over her first point of the game. Bell put Monasterevin in the driving seat in eleventh minute when her lobbing free kick was mishandled by keeper Sinead Corrigan and dropped into the back of the St. Helen’s net to open a four point gap. However that goal was Monasterevin’s last score of the first half.

St Helen’s forwards turned up the pressure on the Monasterevin back line, with Emma Davis and Leanna Keane being denied certain goals by Monasterevin’s number one Caroline Gorry in the thirteenth minute. Gorry was back in action minutes later to tip over a point blank effort from the boot of Emma Farley, however Farley hit the back of Gorry’s net in the twenty ninth minute in a slick move involving Leanna Keane and Laura Burke to put St Helen’s two points clear at the break (1-6 to 1-4).

At the start of the second period St Helen’s were guilty of committing fouls in dangerous areas that allowed Bell to put the Kildare club side back in front albeit it for a very short spell, St Helens top scorer Aisling O’Hara converted to draw the sides level 1-7 apiece in the fortieth minute.

After a short break in play O’Hara raised the white flag before rattling Gorry’s net to raise the green flag, not to be out done Leanne Keane added another goal a minute later followed by a point from Farley to stretch St Helen’s lead to eight points (3-9 to 1-7) as the game moved into the final quarter.

Monasterevin battled back with three points from Bell and one apiece from Joanne Kelly and Claire Kelly to close the gap to three, Sinead Hughes responded with a point before Joanne Kelly fired home Monasterevin’s second goal of the game followed by a point from Bell to level the scores with two minute left on the clock.

With the clock ticking into the red zone, Monasterevin were awarded a free in front of the St Helen’s goal posts after Debbie Coughlan was fouled just outside the square. The St Helen’s supporters were silenced when Bell stepped up to take the final free kick of the game, unfortunately for Bell, her left footed shot glanced off the outside of the upright and wide to send the game into over time

The extra time period of twenty minutes was just as exciting as the first sixty, both sides played their hearts out and were evenly matched with a single point separating the sides after the first period of extra time. Four unanswered points from O’Hara for St Helen’s cancelled out Monasterevin’s efforts to take the lead, and as hard as they tried the Kildare club side could not get out of the red in the final phase of the game, and when referee Ciaran Groom signalled the end of the game it was the St Helen’s players and supporters who were celebrating a great win for the Longford club side.