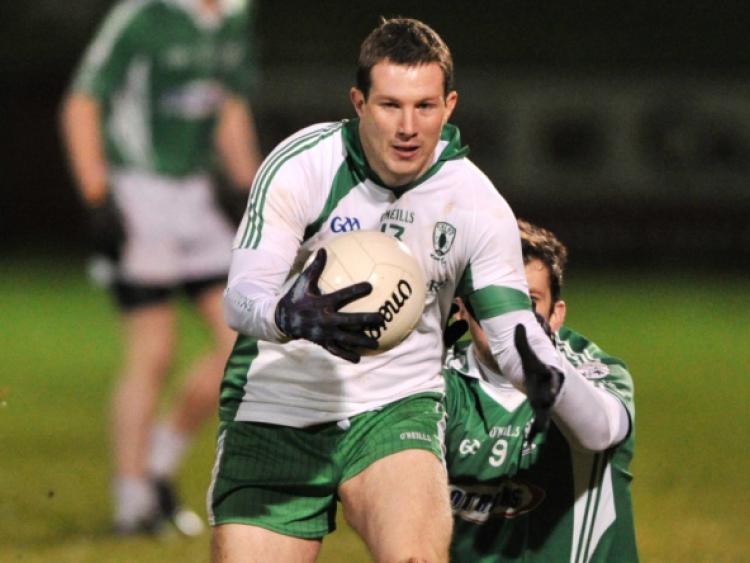 Killoe almost let victory slip from their grasp in the Leader Cup quarter-final replay at Allen Park on Friday night last but late points from substitute Andrew Thompson and Mark Hughes saw the 2012 county champions pip Clonguish by the minimum of margins.

Killoe almost let victory slip from their grasp in the Leader Cup quarter-final replay at Allen Park on Friday night last but late points from substitute Andrew Thompson and Mark Hughes saw the 2012 county champions pip Clonguish by the minimum of margins.

Leading by 0-7 to 0-3 at the break with their points (some excellent efforts) coming from Michael Quinn (3), Sean McCormack (2) and Ronan McGoldrick (2), Emmet Og stretched their comfortable advantage with further scores from R McGoldrick and Quinn in the early stages of the second half and appeared to be in complete control.

Having said that, Clonguish squandered several scoring chances in the first half with Paul Barden (who got the three points for the home side) blazing the ball wide from a tight angle in his attempt to fire home a goal in the 13th minute while Killoe’s Sean McCormack was unlucky when he blasted a close range shot against the post in the 25th minute.

Minus the services of Paddy Dowd, Enda Williams and Joe O’Brien, Clonguish got on top as the second half progressed and came storming back to close the gap, clocking up eight points through Paul Barden (4), substitute Shane O’Brien, Stephen McLoughlin and Kevin Burke to hit the front with time running out.

The best Killoe could do was a cracking score from wing back Shane Dowd in the 47th minute and they looked in trouble when Paul Barden converted his fifth free in the 57th minute to leave Clonguish leading by 0-11 to 0-10.

But Emmet Og (without regulars Padraig McCormack, Darragh Bennett, Daniel Keogh, Daniel Mimnagh and the emigrated Eugene Clarke) refused to panic and got a couple of late scores to clinch a narrow win in advancing to meet Mullinalaghta St. Columba’s in the Leader Cup semi-final at the Laurels.