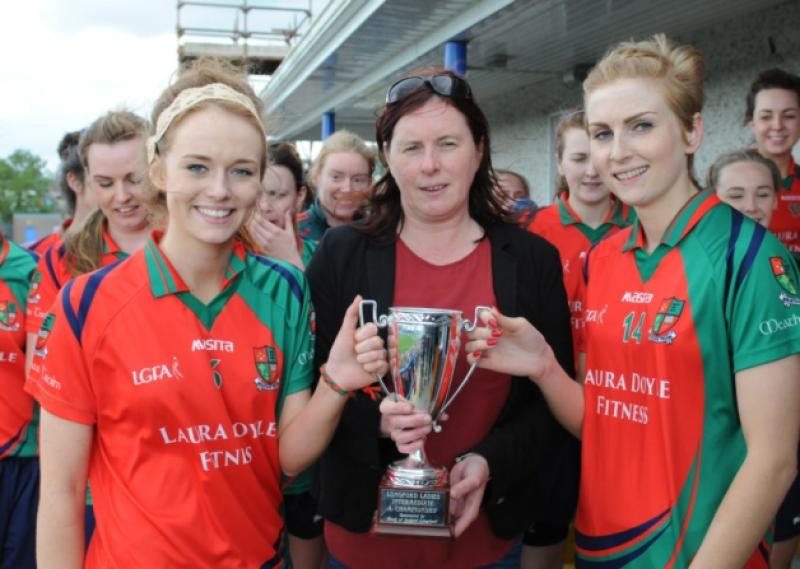 The Edgeworthstown side were in complete control midway through the second half of the county final when they extended their lead to 12 points. But credit to Carrickedmond they didn’t lie down and made a game of it in the last 15 minutes with Michelle Hannify and Emer Powell grabbing goals.

There was just four points between the teams with nine minutes remaining but Carrick just couldn’t cut further into Mostrim’s lead. Mostrim started well and hit over the first three points; Louise Monaghan, Michelle Burke (free) and Sarah Tierney on the scoresheet.

By the ninth minute Carrickedmond were level but Mostrim replied with five unanswered points to go five ahead by the 24th minute. They lost Sinead Noonan in the 26th minute when she was sinbinned and then just before the break Sarah Shannon hit over a free for Carrickedmond to leave four between them, 0-8 to 0-4.

Three minutes into the second half Shannon scored a great point from play but Mostrim went up the field and got 1-1 in quick succession; Tierney was fouled, Burke stepped up to take the free and it ended up in the back of the net. Edel Kenny followed up with a point to extend the lead to six points.

The lead was 11 points in the 38th minute with a neat point from Sarah Tierney and a goal from Edel Kenny after being set up by the excellent Louise Monaghan.

Carrickedmond’s only response was a free from Sarah Shannon while Mostrim went 12 up in the 45th minute with a free from Michelle Burke and a nice point from Monaghan. Surprisingly, that was to be their last score of the game.

In the last 15 minutes Carrickedmond staged a fightback. Michelle Hannify pulled a goal back in the 46th minute. The experienced forward was fouled minutes later and Shannon stepped up to point another free.

Emer Powell hit over a good point in the 50th minute and then one minute later the half-forward got her side’s second goal; a quick free was taken with Powell flicking the ball to the back of the net to put four points between the sides.

Carrickedmond had the momentum now while Mostrim were stunned and couldn’t find a respond to those scores.

Despite enjoying possession in the final minutes Carrickedmond just couldn’t get the scores to avoid defeat. To their credit the Mostrim ladies defended well as Carrickedmond continuously went on the attack.

In the 54th minute Carrickedmond substitute Sinead Farrell was sinbinned. Two minutes later Louise Monaghan blocked Emer Powell’s effort as Carrickedmond searched for scores. In the 58th minute Mostrim full-back Leanne Keegan was sinbinned as both teams ended up with 14 players on the pitch.

In stoppage time Carrickedmond went in search of a goal but just couldn’t raise the green flag for a third time.