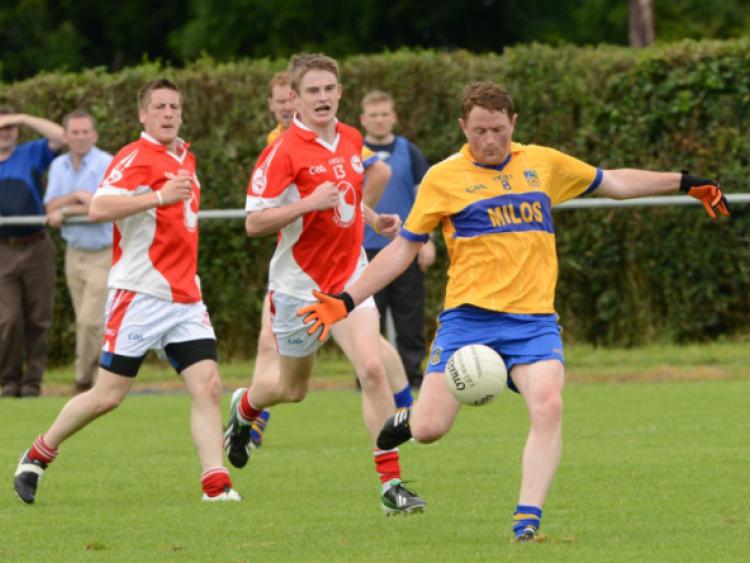 Carrickedmond gradually asserted their superiority over Sean Connolly’s, coming from four points down at one stage in the first half to win by six points in the Intermediate Football Championship first round clash at Keenan Park, Ardagh on Sunday last.

Carrickedmond gradually asserted their superiority over Sean Connolly’s, coming from four points down at one stage in the first half to win by six points in the Intermediate Football Championship first round clash at Keenan Park, Ardagh on Sunday last.

After a sluggish opening quarter which saw them concede two goals, Carrickedmond finally got into the game and six points in a row gave them a two point lead going in at the break, 0-9 to 2-1. While they dominated possession in the second half, they missed a number of scoring chances.

Connolly’s struggled to gain any momentum and didn’t get enough ball into Dessie Reynolds who caused problems whenever he was on the attack.

Eugene Murtagh and Padraig O’Shea exchanged the opening scores before Reynolds scored Connolly’s first goal in the 5th minute. Carrickedmond cut the gap to one in the 7th minute with two quick points but three minutes later Paddy O’Neill got Connolly’s second goal to put them ahead by four.

Carrickedmond recovered well from the concession of those goals and from midway through the first half until the break they completely took control of the game. Two points from Mark McDonnell (one free) and a point apiece from Marty Mulvey and Padraig O’Shea drew them level by the 21st minute.

A pointed free from John Burns edged them ahead for the first time in the game in the 24th minute and in stoppage time substitute Francis Kelly shot over the bar.

Jonathan Keegan was on target in the early stages of the second half before Connolly’s replied with a good point from Trevor Murtagh. Keegan and Mulvey hit over points for Carrick before Reynolds replied with a fine point and a free for the Ballinalee side.

Padraig O’Shea curled over a lovely point for Carrick in the 53rd minute and then Mark McDonnell (2) and John O’Shea added further scores to leave the south Longford side well clear at the final whistle.