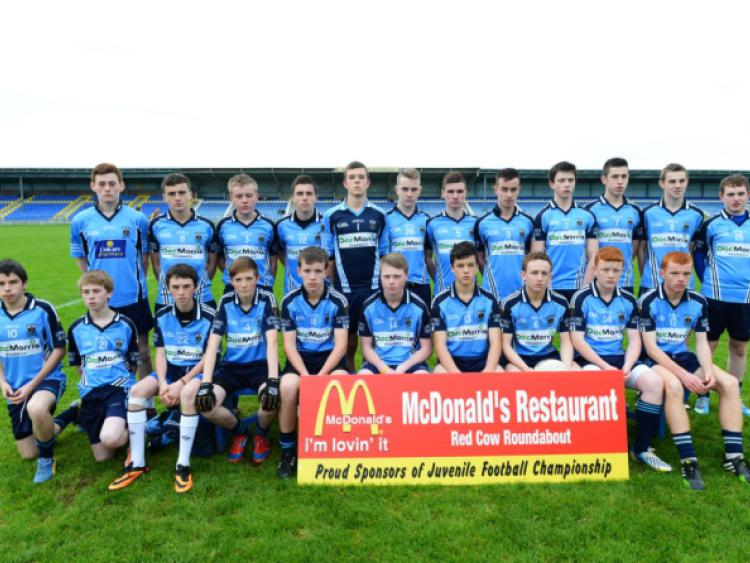 The Longford Slashers U-16 footballers completed a tremendous championship season for the club when they had the narrow margin of two points to spare over Northern Gaels in the Juvenile ‘A’ Football Championship Final Replay at Pearse Park on Sunday last.

The Longford Slashers U-16 footballers completed a tremendous championship season for the club when they had the narrow margin of two points to spare over Northern Gaels in the Juvenile ‘A’ Football Championship Final Replay at Pearse Park on Sunday last.

Obviously inspired by the seniors success in the Connolly Cup decider the previous week, the fired up young Slashers players overcame the considerable handicap of having to line-out without injured centre-half-forward Cian Kavanagh and suffered a further setback when full-back Ronan Sheehan was forced to retire with 22 minutes gone in the game.

The unfortunate Sheehan sustained a bad blow to the arm, at a stage when Slashers were leading by a solitary point (1-3 to 0-5) with Daniel Kirby firing home a crucial goal midway through the first half. Put through by Jamie Masterson with Robbie Clarke (executing a clever pass) and Daniel Smith also involved in the slick move, Kirby’s shot deflected in off the post and Slashers ended up leading by 1-7 to 0-6 at the break.

In fact, they could have been further ahead but for a great block by Northern Gaels corner-back Tom Meehan who kept out a goal attempt from the always dangerous Slashers forward Cian Finnan who clocked up a total of five points (two frees) during the course of this highly entertaining encounter.

Finnan (3), Robbie Clarke (2), Daniel Smith and Daniel Kirby fired over the Slashers points in the first half while Conor Berry, Jason Matthews and Cian Brady got a brace apiece for the Abbeylara/Mullinalaghta amalgamation.

With just five minutes gone in the second half, a much improved Northern Gaels side were back on level terms after scoring four points in a row - three from the impressive Jason Matthews with their other key player Conor Berry also shooting over the bar.

While Cian Finnan replied with a score for Slashers, the town club had a close call in the 37th minute when their keeper Paddy Grogan came to the rescue in producing a terrific save to keep out a cracking shot from Conor Berry and points were then exchanged between Jason Matthews and Daniel Kirby.

A real turning point then materialised in the 43rd minute when a costly mistake in the Northern Gaels defence was punished by Daniel Smith, who fired home a well-taken goal to leave Slashers in front by 2-9 to 0-11. And while the eventual winners only managed one more point through Cian Finnan in the 55th minute they showed a lot of character in a fine team effort to hold out for the club’s first U-16 ‘A’ Championship triumph since 2006 in adding to the U-14 ‘A’ Championship title they also won this year.

Despite enjoying a lot of possession, the best Northern Gaels could do was three more points through Conor Berry and a brace from Jason Matthews, bringing his total to 0-8, and they were left to rue a few missed chances in the closing stages including a close goal attempt from Ultan O’Hara that went narrowly wide.