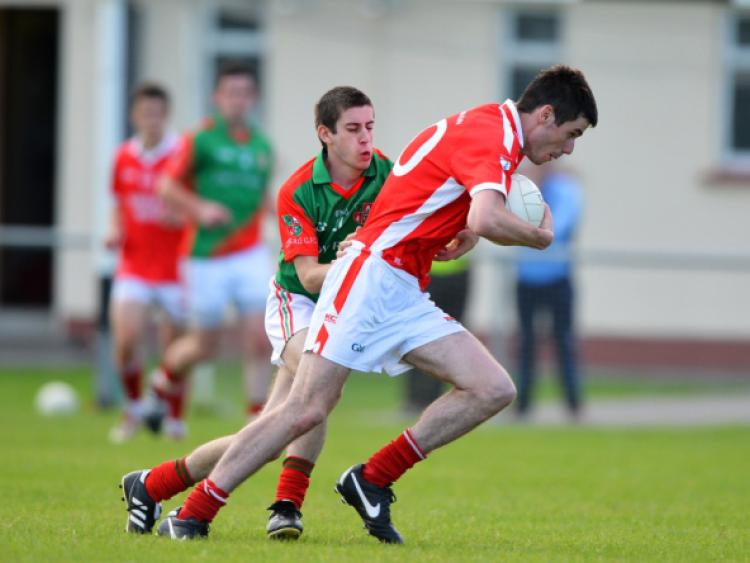 Colmcille registered a crucial win in the Senior Football Championship when they had four points to spare over Ballymahon in the Round 2 clash in Monaduff, Drumlish on Sunday evening last.

Colmcille registered a crucial win in the Senior Football Championship when they had four points to spare over Ballymahon in the Round 2 clash in Monaduff, Drumlish on Sunday evening last.

There was just one point between them in the 48th minute but Colmcille got the vital scores in the final 10 minutes. Ballymahon lost corner-back James Kenny in the 52nd minute when he received a straight red card.

Barry McKeon opened the scoring in the 3rd minute when he pointed a free. Two minutes later John Reid levelled for Ballymahon. Colmcille then edged ahead with points from Anthony Gormley and full-back Noel Farrell.

Ballymahon were level again in the 15th minute with two fine efforts from Colm Flynn. A ’45 from Barry McKeon put Colmcille back in front again in the 17th minute before Flynn pointed a free.

Points were then traded between Anthony Gormley and Thomas Mulvhill before Colmcille got two late points through Paul McKeon and Ciaran Brady to lead by 0-7 to 0-5 at the break.

Declan Reilly hit over a free three minutes into the second half to extend the advantage before Ballymahon almost got a goal when Kevin Diffley’s powerful shot came off the crossbar, although they did get on the scoresheet minutes after with a pointed free from Colm Flynn.

Anthony Gormley and Declan Farrell tagged on points for Colmcille while Colm Flynn (free) and substitute Alan Hudson got scores for Ballymahon. In the 48th minute Ballymahon came to within one of Colmcille courtesy of an excellent point from Mark Connor but that was their final score of the game. Colmcille finished strongly with a couple of great points from Paul McKeon along with a fine effort from Anthony Gormley (his fourth score) to clinch a hard earned win in their quest to reach the quarter-finals.