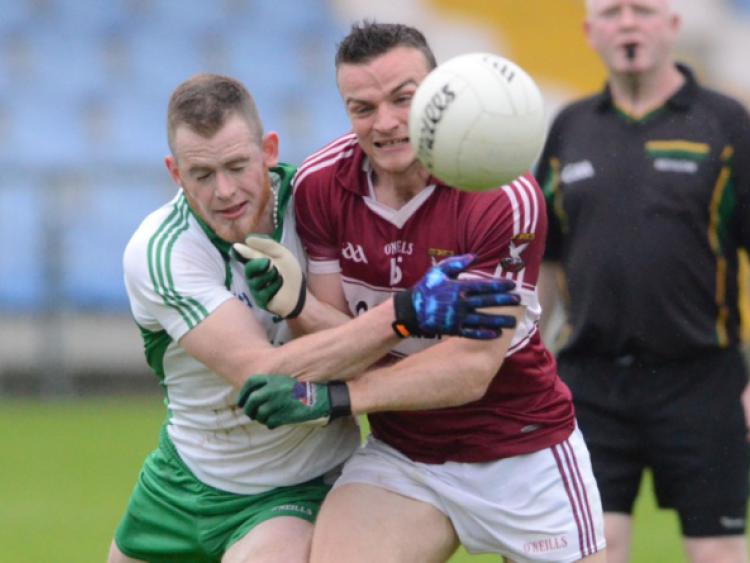 Reigning champions Emmet Og Killoe were made to dig deep to overcome a gallant St Columba’s Mullinalaghta side and advance to the semi-final of this year’s Peter Hanley Motors senior football championship.

Reigning champions Emmet Og Killoe were made to dig deep to overcome a gallant St Columba’s Mullinalaghta side and advance to the semi-final of this year’s Peter Hanley Motors senior football championship.

With minutes remaining at wet and dark Glennon Brothers Pearse Park on Sunday evening it looked as if Columba’s would avenge last year’s county final result and claim victory over Emmet Og but the Killoe side proved just why they’re champions by turning a two point deficit, 1-8 to 2-7, into a three point winning margin.

The superb Sean McCormack started the comeback with a pointed free in the 55th minute before Larry Moran put his side ahead by two in the 57th minute. McCormack landed another free to give his side a three point winning margin.

When the Killoe side needed leaders in this game it was McCormack that stood tall and put in a wonderful performance and pointed two excellent scores from play as well as three from frees.

It was tough on St Columba’s who came so near but yet so far. They were missing a number of players from last year and had to do without the injured Shane Mulligan; and that was a huge loss because they missed his drive and leadership.

Mullinalaghta, who failed to rattle the twine during the group stage of the championship, made a great start to the game and with just two minutes gone David McGivney found Aidan McElligott and he made no mistake by shooting to the net. McGivney then followed up with a free to put four between the sides in the fifth minute, 1-1 to nil.

Killoe didn’t get their first score until the 11th minute; Denis McGoldrick pointing over a free. Michael Quinn set Sean McCormack up for a wonderful point in the 16th minute before Mark Hughes grabbed a goal to put Declan Rowley’s charges ahead by one, 1-2 to 1-1, in the 17th minute.

Wing-back Shane Dowd then followed up with a nice Killoe point. Mullinalaghta responded well to that period of Killoe dominance. McGivney hit over another free before Aaron Earley levelled the game at 1-3 apiece in the 21st minute.

Aidan McElligott had a chance to get a second goal in the 24th minute but he hit his effort wide. They continued to be wasteful though after that, and in some ways they were made to rue it in the end. Just before the break Donie McElligott pointed to put Gerry Lynn’s side ahead by the minimum, 1-4 to 1-3, as the teams retired to their dressing rooms.

One minute after the break Quinn set McCormack up again and the forward hit over another excellent point to draw the sides level. Minutes later Mullinalaghta regained the lead when Gary Rogers high ball was finished to the net by Conor McElligott after a hectic scramble, 2-4 to 1-4.

But Killoe came back and Ronan McGoldrick responded almost immediately with a point, McCormack pointed a free after Moran was fouled while a wonderful save from Mullinalaghta keeper Luke Meegan saw him push Simon Kieran’s effort over the bar; the midfielder was going for goal, 2-4 to 1-7.

Twice inside a matter of two minutes Mullinalaghta went ahead by one point; Rogers and John Keegan pointing either side of a Mark Hughes effort.

In the 54th minute a lovely move involving Donie McElligott and David McGivney set up Rian Brady to put Mullinalaghta in front by two, 2-7 to 1-8, but credit to Killoe they didn’t let up.

Larry Moran was fouled in the 55th minute and McCormack hit over a free and then two minutes later Daniel Mimnagh set Moran up for a decisive goal. McCormack sealed the win with a pointed free just before the end.

Killoe will face Dromard or Longford Slashers in the semi-final and with the momentum they are beginning to build up they’ll be hard stopped in their quest to retain the Connolly Cup.

FOOTNOTE – Having a game at 7.15pm on a wet and miserable late August evening was unfair on teams, supporters and members of the press. Darkness descended on the park midway through the second half and as the game entered its final minutes it was hard to make out players. The conditions were also dangerous for players. Supporters also complained that the only cover in the ground was behind the goals and therefore the view was poor.