Longford secure promotion as they grind down 12-man Offaly 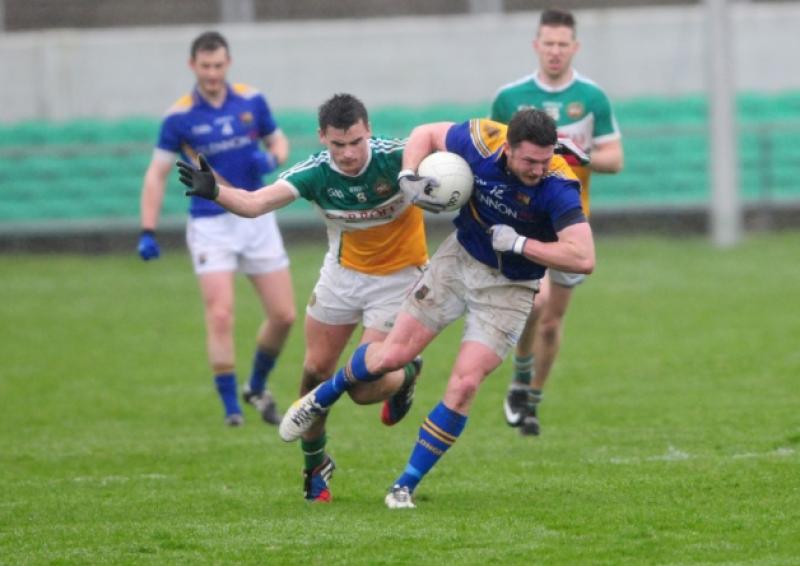 Longford secured promotion to Division 3 of the Allianz National Football League with a 0-13 to 0-10 victory over an Offaly side that bizarrely finished with twelve players at blustery and bitterly cold Glennon Brothers Pearse Park.

The sides were level on six different occasions and it was 0-9 apiece after 49 minutes, before Longford, with numerical advantage and boosted by the introduction of Ross McNerney, sealed the deal with a strong finish.

McConway was shown a straight red card in the 27th minute after an off the ball incident, while Guilfoyle (48 minutes) and Smith (69 minutes) suffered a similar fate after picking up a brace of yellow cards. Smith seemed to be shown a second yellow card for delaying time by tying his bootlace!

Offaly manager Pat Flanagan was highly critical of the referee’s performance and he says they will be appealing the red card shown to McConway ahead of next Sunday’s game crunch against Antrim. Both Offaly and Antrim have nine points apiece and the winner of their final round contest will join Longford in Division 3. Even a draw will be good enough for Offaly as they’ve a better score difference.

Longford face Carlow next Sunday safe in the knowledge that even if they lose they’ll be in the Allianz NFL Division 4 Final on April 25 at Croke Park and next year they’ll be competing in Division 3.

The sides were level on four times during a keenly contested opening thirty-five minutes. Offaly opened brightly and led 0-3 to 0-1 after 13 minutes as Niall McNamee and Bernard Allen (2) supplied the scores.

By the 22nd minute, Jack Sheedy’s Longford were 0-4 to 0-3 in front courtesy of points by Francis McGee, Sean McCormack and Brian Kavanagh (free).

Offaly regained the lead, 0-4 to 0-5, with points by McNamee and Allen, however, they were dealt a sucker blow in the 27th minute as full back Paul McConway was shown a straight red card following his involvement in an off-the-ball incident. Longford’s Brian Kavanagh also picked up a yellow card.

Paul McKeon levelled matters at 0-5 apiece - the fourth occasion the sides were deadlocked - and Allen, with two converted frees at the other end made it 0-5 to 0-7. Longford finished the half with another successful Kavanagh free leaving them a point adrift at the interval, 0-6 to 0-7.

Offaly’s Johnny Moloney grabbed the opening point of the second half, before Longford restored parity for the 5th time with scores from Fergal Battrim (a 1st half sub in place of the injured Barry O’Farrell) and Paul McKeon, 0-8 apiece.

Eoin Carroll’s 40th minute point gave Offaly the lead for the final time. Longford lost Ronan McEntire to a black card in the 47th minute and he was replaced by Shane Doyle. Moments later the visitors were reduced to 13 men as highly influential mid-fielder Graham Guilfoyle was shown a second yellow card.

Paul McKeon’s 49th minute converted free made it 0-9 apiece and Longford had a major let off in the 53rd minute as ‘keeper Paddy Collum moved swiftly off his line to deny Bernard Allen a goal. If Longford had conceded at that stage, even against the 13 men, they might have found it difficult to prevail.

With Michael Quinn getting through a huge volume of work, Longford gradually made their numerical superiority count. U21 star Liam Connerton was sprung for his NFL debut and another young player Ross McNerney came in and he chipped in with three points, along with another from Brian Kavanagh, 0-13 to 0-9.

With Longford on their way back up to Division 3, Offaly had a third player dismissed and they ended the scoring with a McNamee (free).