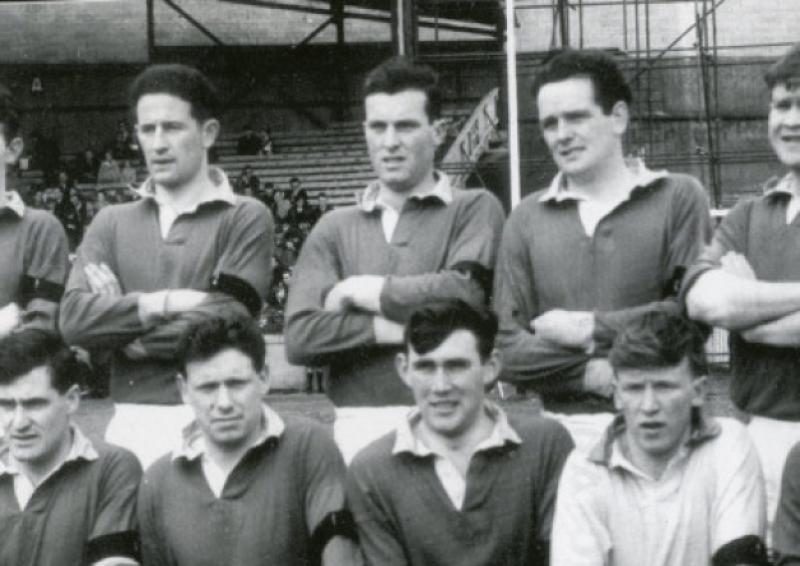 “He is gone to his eternal reward but the legend of John Donlon will live on forever. He put Cashel GAA on the map.”

“He is gone to his eternal reward but the legend of John Donlon will live on forever. He put Cashel GAA on the map.”

Mr Skelly delivered the oration at the request of Longford County Board Chairperson Brendan Gilmore and Cashel Chairperson Jack Bannon.

News of John’s passing last Tuesday week, February 4 cast a sombre cloud over Longford GAA and political circles and deepest sympathy is extended his wife Maureen (nee Carthy from Drumraney in Westmeath) whom he married in 1970 and their family, daughters Pamela and Olivia and sons Seán, Barney, Michael, Eamonn, Timmy and Niall. He was predeceased by another son Dermot, a twin to Timmy, who was tragically killed in a car accident at a young age.

When Longford were crowned National Football League champions in 1966 and Leinster senior football championship kingpins in 1968, John was an inspirational figure, donning the number six jersey from where he delivered many memorable performances. He was the first Newtowncashel player to wear the green of Leinster in the Railway Cup series (Mick Casey was the only other Cashel player to do so) and he also tried his hand at inter-county management, taking charge of Longford in 1971 & ’72.

A reflection of the massive respect and esteem in which John was held was the turnout of his former Longford and Newtowncashel team mates from the 1960’s and 70’s that came to pay their respects. They formed a Guard of Honour, along with GAA officials, at the removal from his home at his beloved Derryhaun to the Church of the Blessed Virgin, Newtowncashel last Thursday evening.

While on Friday, local politicians formed a Guard of Honour, many of whom served with John on Longford County Council from 1967 to 1979. John contested the local elections of ’67 and ’74 on the Fianna Fail ticket in the Ballymahon Electoral Area . He also contested the 1979 local election.

Son of Timothy and Catherine (nee McDermott from Mountdavis, Lanesboro), John was born in 1938 and when his father became ill, he left school at the age of 14 and took over the running of the family farm and shortly after that he was employed by Bord na Mona. He had three sisters Cathy, Margaret and Bridie, and three brothers Bro Michael, Tim and Paddy.

He played with Cashel in 1961 when they were crowned Longford junior football champions and league winners. Cashel captured the junior crown again in 1964.

John then joined the Longford panel in Autumn, ’64, making an immediate positive impression and nailing down the centre half back position. Longford reached the 1965 Leinster senior football championship final, only to succumb to Dublin, however, John’s powerful semi-final performance, where the wings of reigning Leinster champions Meath were clipped, is one that still evokes fond memories for Longford fans.

In ’65 Longford won the O’Byrne Cup and the Gaelic Weekly Tournament which was a tournament for runners-up in provincial finals. Longford beat Sligo in the final at Croke Park in October of 1965 and they maintained this rich vein of form by going on to historically defeat Galway in the 1966 national league final. John shone at centre back. He was very strong, a wonderful fielder, a great reader of the game and he possessed exceptional positional sense.

In 1968 Longford reached the Holy Grail and claimed the county’s only Leinster senior title, defeating Laois in the final by 3-9 to 1-4. Important influences in John’s life around that time were Fr Phil McGee and the great Mick Higgins who managed Longford.

John was selected on the Leinster team of 1968 along with Larry Gillen, Jimmy Hannify and Sean Donnelly and they reached the Railway Cup Final where they were defeated by Ulster. John lined out at left halfback on a side that included other legendary stars like Martin Furlong and Tony McTague (Offaly), Benny Gaughran and Leslie Toal (Louth), Jack Donnelly (Kildare) and Mickey Whelan (Dublin).

Longford relinquished their Leinster title in ’69 and it brought an end to that great team. John moved into county management and was manager of Longford in 1971 & 72.

In addition to starring for Longford, John was producing marvellous stuff for his native Cashel. Beaten in the intermediate championship finals of 1966 and ‘67 by Kenagh and Mostrim, respectively, they finally made the breakthrough in ‘68 and defeated Ballymahon 1-5 to 0-5 after a replay and thus Cashel were in the senior ranks again.

It was the most glorious period of Cashel football. In 1972, Cashel was defeated in the Leader Cup Final by Longford Slashers and in ‘72 they won the 9-a-side SFC in Longford – the only time it was ever run. That same year Cashel eventually won the famous invitational tournament that they organised themselves. For 30 odd years, they watched teams come and go away with the honours, however, in ‘72 John led a Cashel team to victory over Noel Tierney captained Milltown from Galway. He was carried shoulder high up and down the village that evening. Everyone knew it wouldn’t have happened only for John Donlon.

Cashel had many good underage teams and as these players developed, they went on to win the Leader Cup in 1976, ’77 & ’78, and in ’77 they achieved the senior championship breakthrough and even though he was almost 40-years-old, John was still a panel member. He was a driving force on and off the field and a vital cog in helping them get over the line. He captained Cashel from 1963 to 69 (excluding ’66) and again in 1973, a reflection of his ability to be a natural leader.

The chief celebrant at requiem mass was Fr Gerry Brady, assisted by Fr Tom Kearney (home from the missions and Newtowncashel native) and Teresa Donlon provided the music. A man of deep faith, on Sunday week last, John attended mass in Lanesboro, had his throat blessed by former Longford team mate Fr Mickey Reilly and then as he went down the town prior to the Longford v Roscommon NFL game he was struck down. He enjoyed a day at the races and a punt.

He was always up for a bit of fun and never shunned hard work. He was extremely witty, good company, enjoyed life to the full, never seemed to be in bad humour and always had a twinkle in his eye. He worked with Bord na Mona on two different occasions and he was valuable member of the Mount Dillon team that won All-Ireland Bord na Mona championships.

About five years ago, John was diagnosed with cancer of the mouth. He encountered heart trouble and suffered a stroke but during all of that time he fought bravely and it was probably his practice of living the life of an inter county footballer that he disciplined himself, went out walking and cycling and never lay down under the illness, and overcame it.

A Cashel and Longford legend, John Donlon will never be forgotten. May he rest in peace.