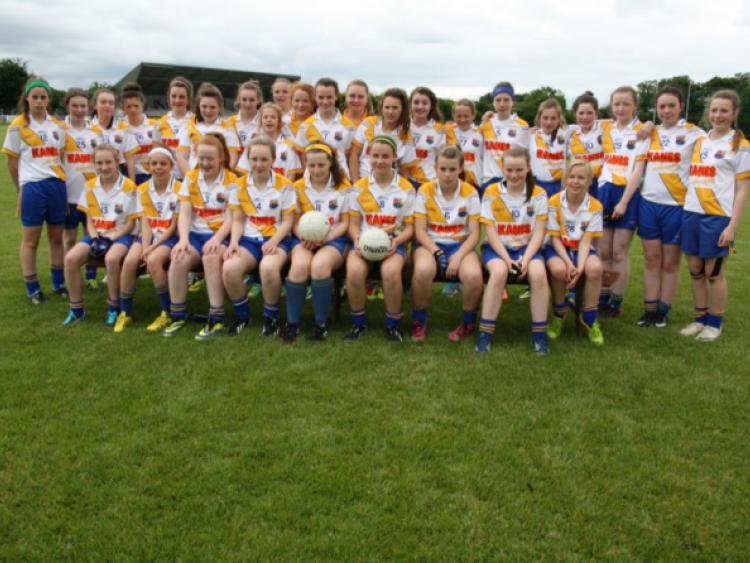 Marie Hickey, Leinster President of the Ladies Gaelic Football Association, described the meeting of Longford and Louth as “one of the best displays of football in this entire championship.” Louth narrowly defeated Longford in a terrific Leinster U-14 ‘C’ Final played in Clane, Co Kildare on Saturday last.

Marie Hickey, Leinster President of the Ladies Gaelic Football Association, described the meeting of Longford and Louth as “one of the best displays of football in this entire championship.” Louth narrowly defeated Longford in a terrific Leinster U-14 ‘C’ Final played in Clane, Co Kildare on Saturday last.

The excellent pairing of Megan Lynn and Jessica Barry in the backline kept Louth at bay, resulting in Aisling McCormack adding another point to the scoreboard. Excellent keeper Sarah Lee Greene saved Longford from falling further behind, making four successive saves from Bronagh McArdle’s persistent attacks on goal. At the end of the first half, Louth led by two points.

The second half provided the large crowd of supporters with an exciting and nail-biting game of football. It was Louth’s Lauren Boyle who restarted the game with four tremendous scores as her side dominated the opening minutes.

Ciara Foxe brought the Longford side back into the running for the title, effortlessly shutting down the Louth forward line with her spectacular defensive style. Longford fought hard to prevent further damage in the course of the second half, and displayed excellent technical skills in the process. A fine moment in the game was provided by Niamh Brady when she replaced Una Mulligan midway through the second half. Longford flawlessly played the ball into the Louth backline. Niamh Brady took advantage of the opportunity which led to a goal for Longford. Only ten minutes remained when Longford took the lead by one point.

But It wasn’t long before Louth regained the lead, as Niamh Rice responded with a goal and they had the extra edge to be crowned the 2014 Under 14 Leinster ‘C’ champions.

Slashers player Jessica Barry was awarded player of the match by Marie Hickey after the game.