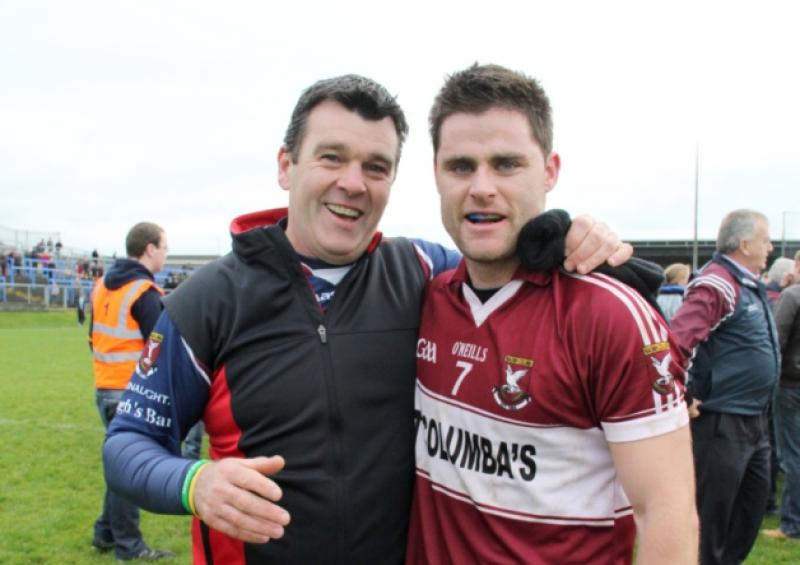 St. Columba’s manager Gerry Fox spoke of his delight for the players and the Mullinalaghta parish after his side captured the Leader Cup on Sunday, ending a 62 year wait for the north Longford club to regain the senior league title.

St. Columba’s manager Gerry Fox spoke of his delight for the players and the Mullinalaghta parish after his side captured the Leader Cup on Sunday, ending a 62 year wait for the north Longford club to regain the senior league title.

“We have been very aware of it for the last couple of years for the time that I have been in charge. We are also aware of the Pearse Park jinx as such, that we can’t win a game here. We have broken that now. There are a lot of players who have played for us over the years and have not won a title in a Mullinalaghta jersey at senior level. That’s huge for them. What is means to the parish is unbelievable too. Finally to have some silverware,” he told the Leader.

Just like their semi-final game against Killoe, St. Columba’s had to come from behind against Longford Slashers in the title decider. Fox believes his side’s resilience played a huge part in their win: “They are a great bunch of lads. They have great belief in themselves. It was just a matter of winning it out. They held out and never gave in. That’s the bottom line with them.”

It was very much a team performance for the Mullinalaghta side which was something that pleased their manager: “Everyone did a fantastic job. We knew we were going to have to be at our very best. There were some man marking jobs that worked out for us. It all worked out on the day. Because it worked it was great, if it didn’t my head would have been on the chopping block,” joked Fox.

Over the last number of years Mullinalaghta have shown great potential but have never got any reward. Fox is hoping that this win is only the start for them: “We will take this success and see where we go from here. It’s a big help having young lads there that are used to winning things. At the end of the day though it’s the Leader Cup and every team wants to win a Championship. But it’s a huge title for us; the first senior success in over 60 years and hopefully this will bring them on.”