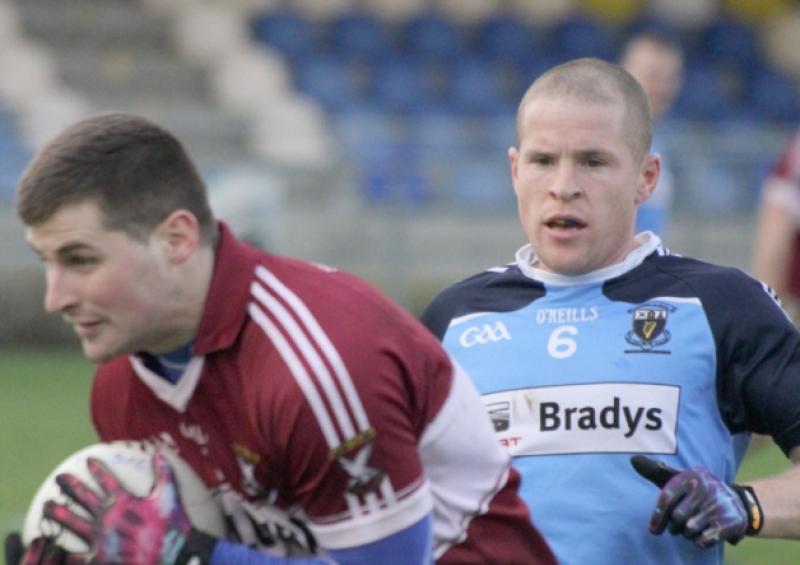 Mullinalaghta St. Columba’s have shown a lot of promise in recent years and they managed to make a significant breakthrough at senior level when scoring a well deserved victory over county champions Longford Slashers in the Leader Cup Final at Glennon Brothers Pearse Park on Sunday last.

Mullinalaghta St. Columba’s have shown a lot of promise in recent years and they managed to make a significant breakthrough at senior level when scoring a well deserved victory over county champions Longford Slashers in the Leader Cup Final at Glennon Brothers Pearse Park on Sunday last.

Much to the sheer delight of the players and their enthusiatic supporters who comprised the bulk of the small attendance (in the region of 300), Mullinalaghta captured the famous old trophy for the first time since 1951 and were worthy winners of the senior football league title.

St. Columba’s basically showed the far greater hunger in their fierce desire to succeed and the determined manner in which they battled back from four points down in the early stages of the second half could only be admired with James McGivney firing home a crucial goal in the 43rd minute.

Fortunate to be on level terms at the break (0-6 to 0-6), sluggish Slashers (minus the services of Michael Brady and Dominic Glennon) eventually awoke from their slumber to shoot four points in a row through Niall Mulligan, Colin Smith (free), Martin Tarmey and Mark Smith (free) in the space of just five minutes and were looking the likely winners.

But Mullinalaghta (missing key players Ruairi McElligott and Kevin Mulligan) refused to be rattled and after county minor Rian Brady kicked over a terrific point in the 40th minute, the McGivney brothers David and James combined with the latter racing through to score a cracking goal.

All of a sudden the trend of the game had changed with the sides all square (1-7 to 0-10) and when Slashers suffered the setback of losing Peter Foy to a straight red card in the 47th minute, the momentum was with Mullinalaghta in their quest to achieve a notable triumph.

A wayward free from David McGivney broke kindly into the path of James McGivney who slotted the ball over the bar to put St. Columba’s in front with 55 minutes gone on the clock but Slashers were level soon after when the impressive Mark Smith converted a free for his sixth point in this tight contest - their first score for 20 minutes.

But Mullinalaghta were not going to be denied and when midfielder John Keegan was fouled on his way through in the 59th minute, up stepped county minor David McGivney to land the resulting free for what proved to be the all-important winning score.

St. Columba’s finished the stronger and after having a goal attempt blocked down in stoppage time, James McGivney was just off target from a ‘45’ and time ran out for Slashers who can make no excuses for their failure to complete the senior double with captain Dermot Brady cleared to play after the club won the appeal to the straight red card he received in the semi-final against Abbeylara the previous week.

Mullinalaghta manager Gerry Fox deserves a lot of credit for a job well done in guiding his very committed team to Leader Cup glory - a competition the north Longford club won for a record five-in-a-row back in the late 1940’s and early 1950’s.

And particularly impressive on Sunday last was John Keegan, who really made his presence felt at centrefield, while David McGivney (who fired over a total of six points and set up the goal) was very much the main man in the St. Columba’s attack. James McGivney (scoring 1-1) figured most prominently in the half-back-line and it was generally a fine all-round performance by Mullinalaghta whose will-to-win got them over the line.

While Slashers led 0-5 to 0-3 at one stage of the first half, all their points coming from the Smith brothers including a couple of cracking strikes from play by Mark, Mullinalaghta were enjoying the better of the exchanges and JJ Matthews should have scored a goal in the 13th minute when his point-blank shot was saved in fine fashion by opposing keeper Colm Farrell.

St. Columba’s got two early scores from frees converted by David McGivney and then proceeded to squandered a few other chances before Gary Rogers landed a very good point from the left wing in the 19th minute.

Slashers were also guilty of some poor finishing but still managed to hold a slender lead before Mullinalaghta fired over three points on the trot through David McGivney - two frees and a well struck effort from play in first half stoppage time.

There was still time for Slashers to level matters before the break when Mark Smith fired over a free but Mullinalaghta got the decisive only goal approaching the midway point in the second half to eventually emerge victorious.