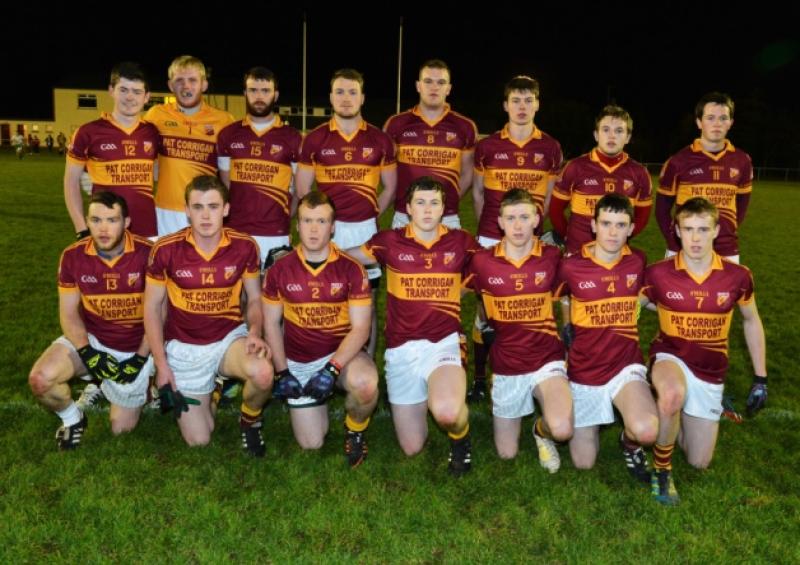 After suffering the bitter disappointment of defeat in the final of the ‘A’ competition for the past three years, it finally came right for Fr. Manning Gaels who conquered Killoe to capture the U-21 Championship title for the first time since 1999.

After suffering the bitter disappointment of defeat in the final of the ‘A’ competition for the past three years, it finally came right for Fr. Manning Gaels who conquered Killoe to capture the U-21 Championship title for the first time since 1999.

In front of a big attendance (in the region of 500) at the Monaduff grounds on Friday night last, the outcome of the entertaining floodlit county final was in the balance right up until the closing stages before the Drumlish/Ballinamuck side struck the killer blow with a goal from Martin Cassidy in the 56th minute to stretch their lead to five points, 1-11 to 1-6.

The generally prominent James Noonan weaved his way through the Emmet Og defence to create the opportunity and the ball reached Ronan Corr who gave Cassidy the perfect pass for the point-blank finish, much to the sheer delight of the Fr. Manning Gaels supporters.

There was no way back for Killoe and while Paddy Kiernan landed a long range effort over the bar to close the gap, their hopes of salvaging the situation were dashed when opposing keeper Paddy Collum produced a great save to keep out a close range goal attempt from Paddy Thompson in the second minute of stoppage time.

The Gaels added another couple of points to their tally through Darren Farrelly and Ronan Corr to emerge worthy winners of the U-21 ‘A’ title and revenge was very sweet indeed, taking into account that they lost to neighouring rivals Killoe in the 2011 and 2012 finals in this grade.

Injuries to key players Padraig McCormack and Daniel Mimnagh certainly did not help the cause of the reigning champions and while McCormack was brought on in the 50th minute in the hope of providing the inspiration for a Killoe comeback it never materialised.

Fr. Manning Gaels showed the greater hunger and will-to-win throughout this lively encounter and while it was a very determined team effort, Diarmuid Cooney really stood out in popping up all over the pitch and was the obvious choice for the coveted man-of-the-match award, the Jimmy Tully trophy in memory of the late Fr. Manning Gaels footballer. Special mention also to Gaels wing forward Anthony Kane for a fine display.

Despite conceding a goal after only two minutes when Killoe full-forward Mark Hughes raced through to plant the ball in the back in the net, Fr. Manning Gaels were on a mission to make amends for the three previous final defeats and had hit the front by the 12th minute following five points in a row from James Noonan (three frees), Podge Gill and Diarmuid Cooney.

But the Gaels only managed one more score during the remainder of the first half when Darren Farrelly shot over the bar in the 19th minute whereas Killoe came battling back to lead by 1-4 to 0-6 at the break with their points coming from Mark Hughes (two frees), David Mimnagh and Paddy Kiernan.

Both sides were guilty of squandering several chances during the course of the game and the Gaels will probably have felt that they should have been ahead at half-time after enjoying the greater share of the possession.

While Killoe extended their slender advantage when Mark Hughes converted a free in the early stages of the second half, the Gaels came storming back to fire over four points on the trot (all from play) through Emmet Noonan (2), Martin Cassidy and James Noonan in a decisive dominant period between the 33rd and 36th minutes with Diarmuid Cooney a key figure in this glorious spell.

A terrific strike from near the sideline by their most dangerous attacker Mark Hughes in the 41st minute left Killoe trailing by the minimum of margins (0-10 to 1-6) but Fr. Manning Gaels were not going to let victory slip from their grasp with James Noonan converting a well struck free in the 44th minute.

In the final quarter of the contest, the Gaels ended up outscoring Emmet Og 1-2 to 0-1 to clinch a badly needed success for the club and great credit must go to the U-21 management team of Mike Mulleady, Frank McNamee and Seamus Noonan for a job well done.