ABBEYLARA BATTLE BACK TO SNATCH VICTORY 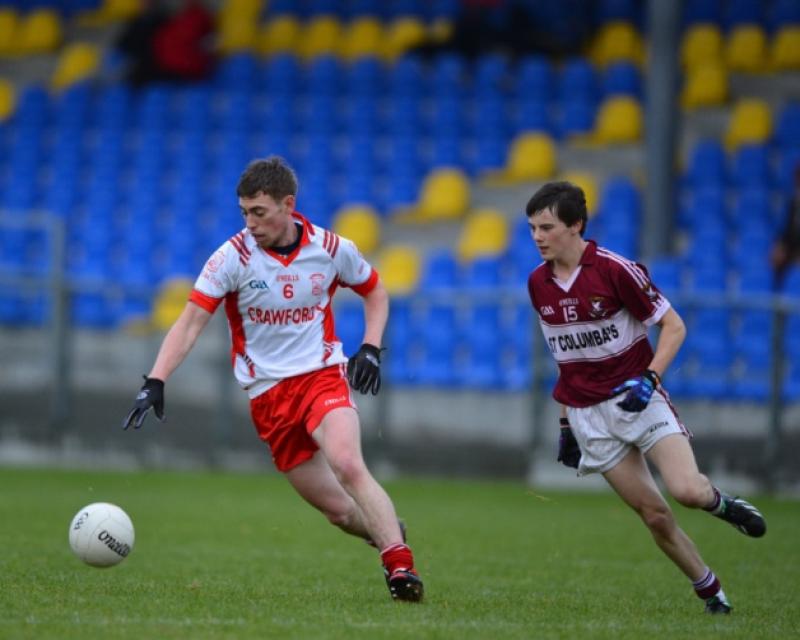 A speculative shot from substitute Robbie Smyth that yielded a goal in the early stages of the second half proved to be the decisive score as Abbeylara showed a lot of spirit in battling back to snatch victory in the Senior Football Championship quarter-final replay.

A speculative shot from substitute Robbie Smyth that yielded a goal in the early stages of the second half proved to be the decisive score as Abbeylara showed a lot of spirit in battling back to snatch victory in the Senior Football Championship quarter-final replay.

A small attendance braved the cold and wet conditions at Pearse Park on Saturday evening last and, once again, Mullinalaghta let a comfortable lead slip from their grasp as they blew a glorious opportunity of getting through to the semi-final. St. Columba’s made a flying start to lead by 0-4 to 0-0 after 13 minutes with their scores coming from Kevin Mulligan, Aidan McElligott, David McGivney (free) and James McGivney (a terrific strike). Abbeylara had to wait until the 18th minute for their opening score when Jason Kelly converted a free and could have been in even deeper trouble but for a brilliant block by Fergal Battrim who prevented Donal McElligott from scoring a goal. Even at that, Mullinalaghta were looking good when leading by 0-7 to 0-3 at the break with their other scores coming from David McGivney (play and free) with his brother James kicking over a ‘45’. Abbeylara managed a point apiece from Sean Murphy and Jason Kelly (free) but got right back into contention when Robbie Smyth’s attempt for a point ended up in the back of the net with two minutes gone on the changeover.

It was a tight contest from there until the finish with Abbeylara outscoring Mullinalaghta 0-5 to 0-3 and a Jason Kelly free in the 54th minute put them in front for the first time. And that was the way it remained as St. Columba’s missed a couple of late chances to force extra-time and had midfielder Ruairi McElligott sent-off in the 59th minute after receiving a second yellow card.