Longford SFC: Last two quarter-final places to be decided in the quest for Connolly Cup glory 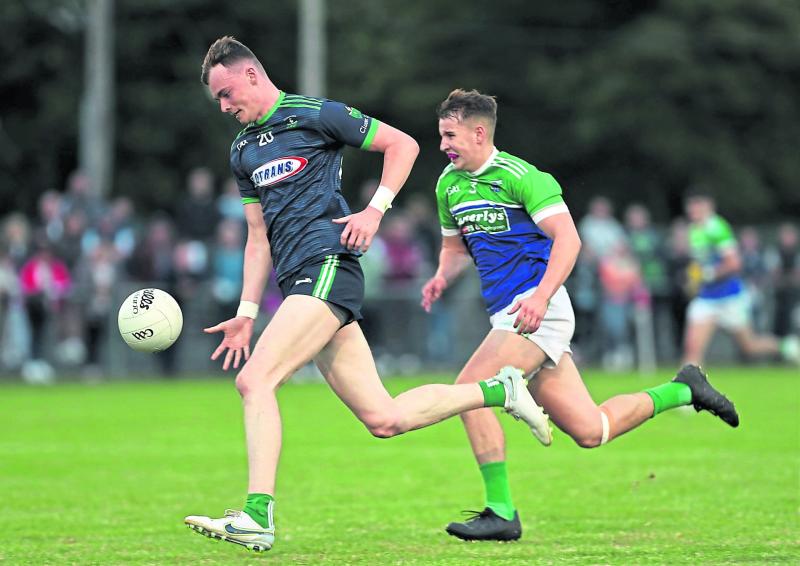 Jack Duggan on the attack for Clonguish in breaking away from Rathcline defender Jakub Kajan. Action from the SFC Round 4 game on Friday night last Photo: Syl Healy

Final round fixtures in the group stage of the Peter Hanley Motors Senior Football Championship will be played this weekend with just two places to be decided to complete the composition of the quarter-finals.

Through to the last eight are Abbeylara, Colmcille, Dromard, Longford Slashers, Mostrim and Mullinalaghta St Columba’s and it remains to be seen who will join those six qualifiers in the battle for the Connolly Cup.

In the two games that really matter, Killoe will be strongly fancied to beat Clonguish at the Monaduff grounds and there is also a lot of stake in the other Group 2 fixture between Rathcline and Carrickedmond at Pairc Chiaran, Newtowncashel.

Both matches are scheduled for a 8pm start this Friday night and Emmet Og will reach the quarter-finals with a win or a draw against Clonguish after snatching a vital point in the last gasp draw against Abbeylara on Saturday evening last.

Should Clonguish ever happen to spring a shock then they could end up going through while the tension will also be high in the meeting of Rathcline and Carrickedmond.

A draw will suffice for the Lanesboro outfit but should they suffer a defeat then Carrick will join them on the same numbers of points and thus will qualify for the quarter-finals on the head-to-head regulation providing Clonguish lose or draw against Killoe.

There are a few permutations but Killoe and Rathcline are in pole position to advance a stage further.

There is little at stake in the other three senior fixtures bar the seeding slots for the quarter-finals.