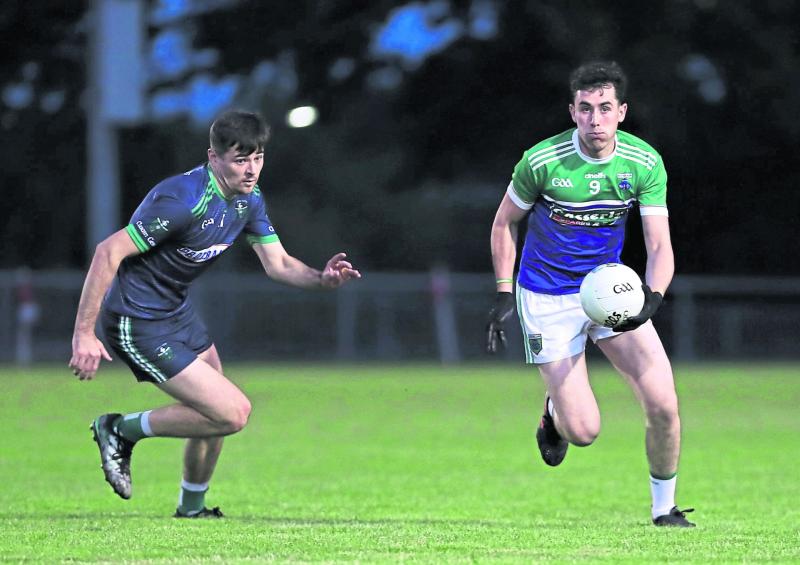 Shane Kenny on the ball for Rathcline in facing the challenge of Clonguish opponent Ian McCormack. Action from the SFC Round 4 clash in Newtowncashel Photo: Syl Healy

Rathcline are just a step away from a place in the 2022 Senior Football Championship quarter-finals after holding out to conquer Clonguish in a thrilling finish to the cracking Group 2 clash at Pairc Chiaran in Newtowncashel on Friday night last.

It looked all over when Iarla O’Sullivan raced through to score the fourth goal for Rathcline with five minutes of normal time remaining to leave his side leading by the wide margin of nine points, 4-9 to 0-12.

The Lanesboro outfit were down to 14 players at this stage after Shane Kenny received a black card in the 50th minute but Clonguish staged a remarkable recovery during the frantic final few minutes to close the gap to just two points.

Two goals in quick succession from Jack Duggan (who clocked up the most impressive tally of 2-8 in total) had Rathcline reeling on the ropes and while Chris Gordon then fisted the ball over the bar, gallant Clonguish were unable to deliver the knockout blow.

The late, late drama in this amazing match was not over yet as Clonguish’s Cian Sutton (straight red card) and Rathcline’s Shane Donohoe (second yellow) were sent-off in stoppage time before Cronan Flood surged forward to register the insurance point for the shannonsiders.