Longford SFC: Granard crash out of the county championship 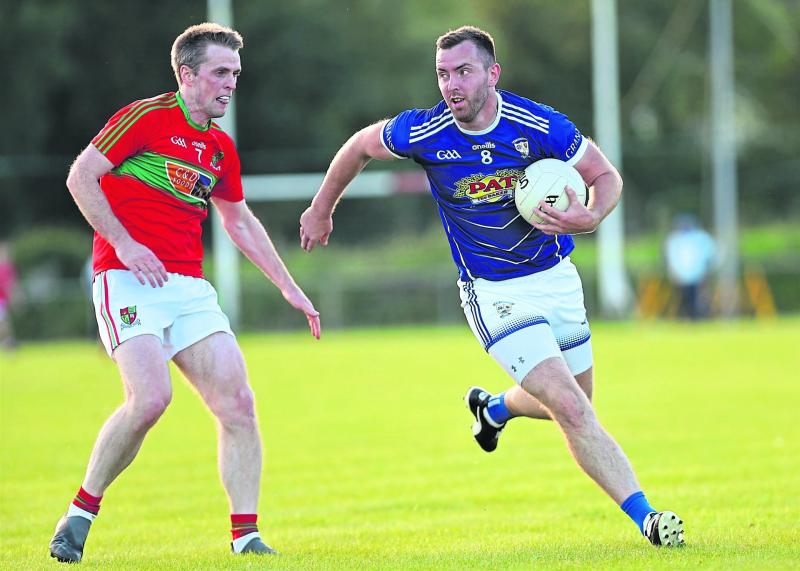 Charlie Martin on the ball for Granard in facing the challenge of Mostrim opponent Niall Quinn. Action from the SFC Round 3 clash on Sunday evening last Photo: Syl Healy

While there are still two rounds of fixtures to be played in the group stage of the 2022 Senior Football Championship, already through to the quarter-finals are Dromard, Mullinalaghta St Columba’s, Mostrim and Longford Slashers.

With Granard suffering their third consecutive defeat after going down by the narrow margin of two points against Mostrim on Sunday evening last, the four qualifiers from Group 1 are now confirmed with St Mary’s crashing out of the Connolly Cup.

Granard were under a lot of pressure going into the must win match against Edgeworthstown and will have nothing but pride to play for in their remaining match against Dromard at the Monaduff grounds in Drumlish this Friday night, throw-in 8pm.

After losing to Slashers in the opening round, the head-to-head regulation was also a negative for St Mary's  in their failure to make further progress.

Mullinalaghta received a walkover from St Brigid’s Killashee last weekend and the reigning county champions are back in action against Slashers at Maguire Park in Ballinalee on Saturday evening (6.45pm).

With only the seeding slots for the quarter-finals to be decided, there is little at stake in this match but St Columba’s will still be determined to finish top of the group.

The outcome in Group 2 is a much more intriguing situation with Colmcille leading the way after collecting the maximum total of six points from their three fixtures played so far.

Barring a major surprise, Colmcille will extend their unbeaten run on the path to the quarter-finals when they take on Carrickedmond at the Higginstown grounds in Granard on Saturday evening (6.45pm).

The most attractive match is the meeting of Abbeylara and Killoe at Pairc na nGael in Dromard (6.45pm), which is also scheduled for Saturday evening.

After registering their first win in the current championship campaign when proving too strong for Carrickedmond last weekend, Emmet Og need at least one more win to clinch a place in the knockout stages.

Abbeylara are almost through to the last eight after scoring a comprehensive win over Clonguish in Round 3 and this group will go right down to the wire with a fierce scrap to complete the composition of the Longford SFC quarter-finals.

The winners of the crunch clash between Rathcline and Clonguish at Pairc Chiaran in Newtowncashel this Friday night (8pm) will take a big step in that direction.