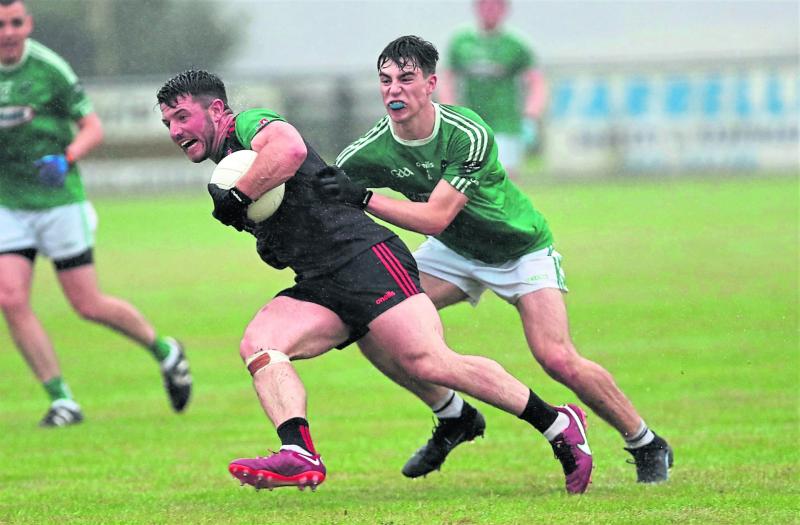 Cathal McCabe on the attack for Colmcille in his bid to evade the challenge of Clonguish defender Conor Smith. Action from the SFC Round 1 game Photo: Syl Healy

A flicked goal from Cathal McCabe with just a couple of minutes gone on the changeover was the decisive factor as Colmcille overcame Clonguish in the Senior Football Championship Round 1 clash at Maguire Park on Friday evening.

Without the vastly experienced trio of Declan Reilly and the McKeon brothers Barry and Paul, this was a harder than expected task for Colmcille who led by just a single point (0-4 to 0-3) at half-time in the wet conditions at the Ballinalee venue.

Conceding the goal in the early stages of the second half proved to be a big blow for Clonguish who finished the game with 14 players on the pitch after substitute Matthew Flynn received a black card in the 54th minute.

When Chris Gordon converted a free in the 41st minute, the gap was closed to just two points (1-5 to 0-6) but Colmcille got back on top to fire over a further five scores during the remainder of the match.

Subs:- Matthew Flynn for N O’Reilly (38 mins); Jack Duggan for I McCormack and Joe O’Brien for P Molloy (both in the 45th minute); Greg Masterson for G Moore (57 mins).