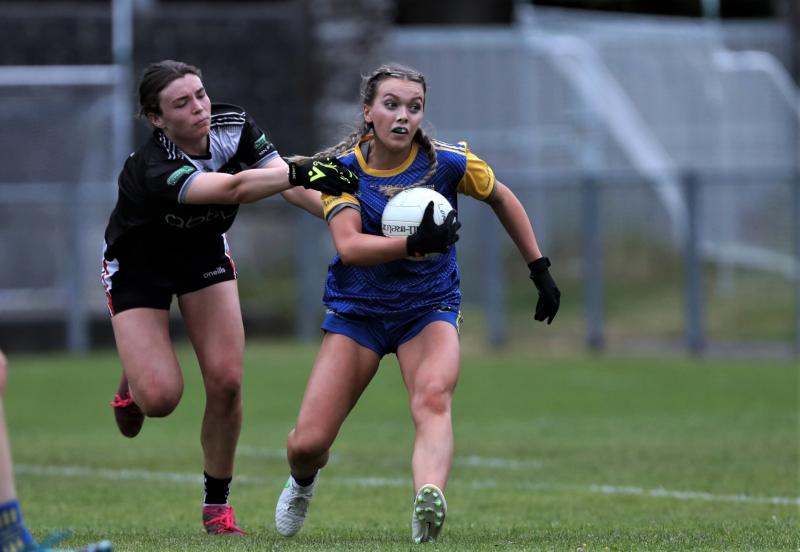 Ella Duggan pictured in action for Longford against Sligo in the All-Ireland Minor ‘B’ Championship semi-final at the Boyle GAA grounds Photo: Syl Healy

Boosted by a brilliant start in establishing a commanding 1-5 to 0-0 lead with just ten minutes gone on the clock, superior Longford shattered Sligo in the Ladies Football All-Ireland Minor ‘B’ Championship semi-final at the Boyle GAA grounds on Wednesday evening.

Elle Lynn finished the ball to the net from close range in the early stages of the game and a couple of cracking goals in quick succession from Kate Shannon in the 19th and 21st minutes put rampant Longford in complete control.

Sligo conceded a fourth goal just before the break courtesy of a powerful strike from Anna Hayden and the stunned Connacht ‘B’ champions ended up trailing by 4-6 to 0-3 at half-time.

While it was all over as a contest, Longford continued to pile on the pressure in adding a further 1-8 to their most impressive tally in the second half with Elle Lynn scoring the fifth goal in the 41st minute.

Sligo, to their credit, kept plugging away despite the lost cause and their perseverance was rewarded with a couple of late consolation goals through Amy Kennedy and Lauren Normanly.

This was a tremendous team effort by the Pat Tiernan managed Longford minors who are growing in confidence and they will not fear Monaghan in the All-Ireland final on Wednesday August 3rd.

The Ulster ‘B’ champions came from seven points down at half-time to defeat Kerry by the minimum of margins (5-7 to 3-12) in the other semi-final.