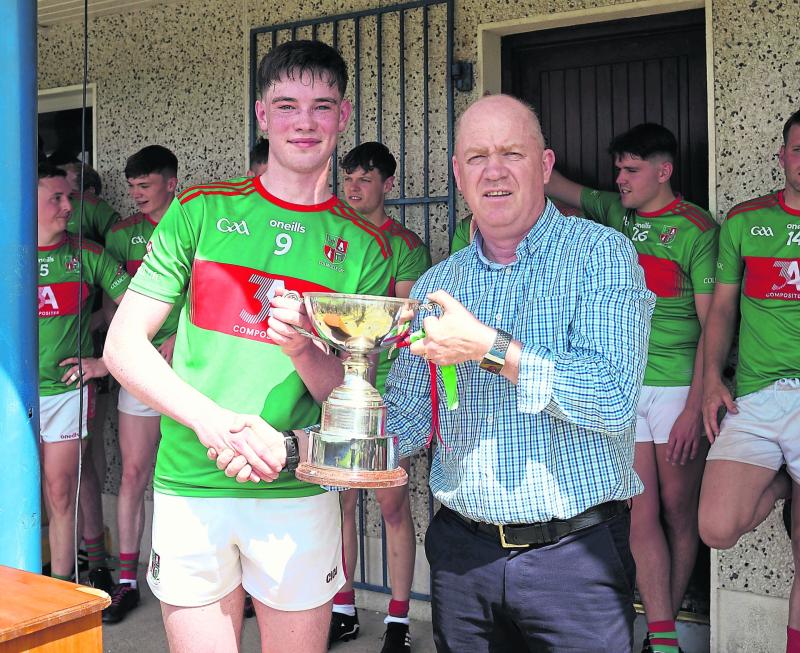 A stoppage time goal from Cathal McCabe clinched the Senior Football League title for Colmcille who got the better of Mullinalaghta in the Division 1 Final at Glennon Brothers Pearse Park on Sunday last.

This was a real championship intensity about this clash of the arch neighbouring rivals for the Johnny Skelly Cup in the glorious hot weather and thanks to a well-taken goal from Barry McKeon in the 17th minute it was Colmcille who led at the break by four points, 1-7 to 0-6.

That advantage was extended following a further brace of scores from frees converted by Jack Macken and McKeon in the early stages of the second half but St Columba’s gradually closed the gap in staging a determined comeback.

A goal from Rian Brady in the 40th minute brought Mullinalaghta right back into contention and the ding-dong battle continued during the remainder of the match with just the minimum of margins (1-11 to 1-10) separating the sides when Brady shot over the bar with time running out.

Colmcille were under pressure but managed to engineer another attack with experienced substitute Podgie Murtagh playing the ball into Barry McKeon who proceeded to set up Cathal McCabe for the killer goal, the latter making no mistake from a few yards out.

Mullinalaghta suffered an early setback when Shane Mulligan was dismissed for a black card with less than two minutes gone on the clock and when he came back on the sides were deadlocked at 0-3 apiece.

James McGivney, Jayson Matthews (mark) and David McGivney (a brilliant strike) accounted for the St Columba’s scores while Jack Macken (free), wing back Dylan McCabe and Ciaran McKeon were on target for Colmcille who started without the injured Enda Macken.

A terrific point from James McGivney put Mullinalaghta back in front midway through the first half before Colmcille grabbed a crucial goal moments later.

A long ball in from Ciaran McKeon was well caught by Barry McKeon in front of the posts  and he found the space to shoot to the net from close range, a lead they subsequently never surrendered.

Scores were then exchanged twice through Rian Brady and David McGivney (free) for Mullinalaghta while the promising 20-year-old Jack Macken (free and play) was on the mark for Colmcille.

Great scores from Barry McKeon and Vinny Hourican in the closing stages of the first half left Mickey Harkin’s charges in a good position and the lead was increased to six points before Jayson Matthews converted a mark for Mullinalaghta.

Then came the opportunist goal after David McGivney broke down a centre from Shane Mulligan into the path of Rian Brady who found the net from close range.

Colmcille showed a lot of character in recovering from this blow and a couple of cracking points followed from Jack Macken and Rory Hawkins to leave the Ciaran Fox managed St Columba’s trailing by 1-11 to 1-7.

But Mullinalaghta showed their vast experience in battling back to fire over three points in a row through James McGivney, David McGivney (free) and Rian Brady (the latter on target in the final minute of normal time) in a grandstand finish with a draw and extra-time a distinct possibility.

Colmcille were not going to be denied some success and the late, late Cathal McCabe goal settled the issue in a dramatic finish to the entertaining senior league final.