Longford Senior League: Abbeylara just have the edge over Rathcline 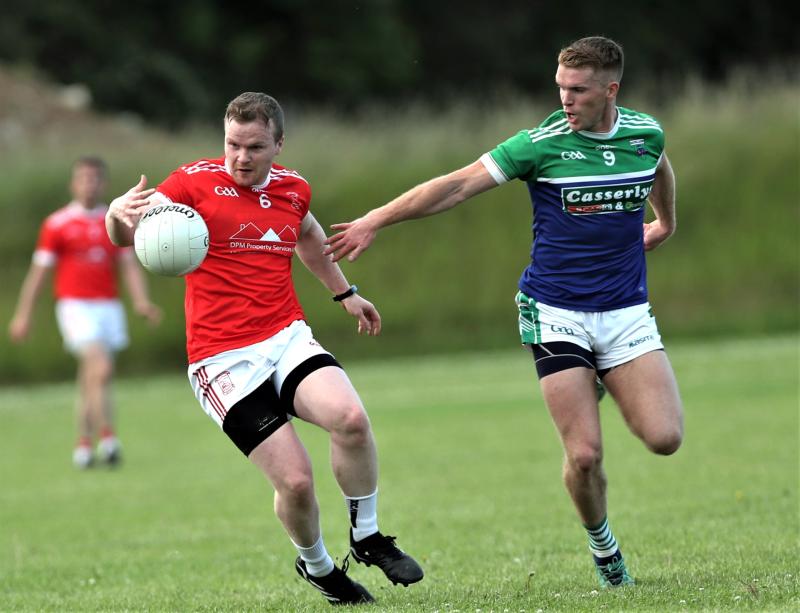 Michael McHugh on the ball for Abbeylara in this tussle with Rathcline opponent Shane Donoghue. Action from the Division 1 league clash at Clonbonny Photo: Syl Healy

The build up to the 2022 Senior Football Championship continued in earnest at the Clonbonny grounds with Abbeylara just having the edge over Rathcline in the All County League Division 1 clash on Wednesday evening.

The main man for Abbeylara at the Lanesboro venue was Nigel Rabbitt who fired over a total of nine nine points (seven frees) and this entertaining encounter developed into something of a shoot-out with Oran Kenny registering eight points (five frees) for Rathcline.

The home side produced a strong finish to the first half to lead by 0-7 to 0-5 at the break but the visitors gradually got on top on the changeover to win by the narrow margin of two points in a rousing ding-dong battle.

Despite shooting 15 wides during the course of the game, Abbeylara overcame the setback of losing Michael McHugh to a black card in the 49th minute and Rathcline suffered the same fate in stoppage time when James Carroll was dismissed.