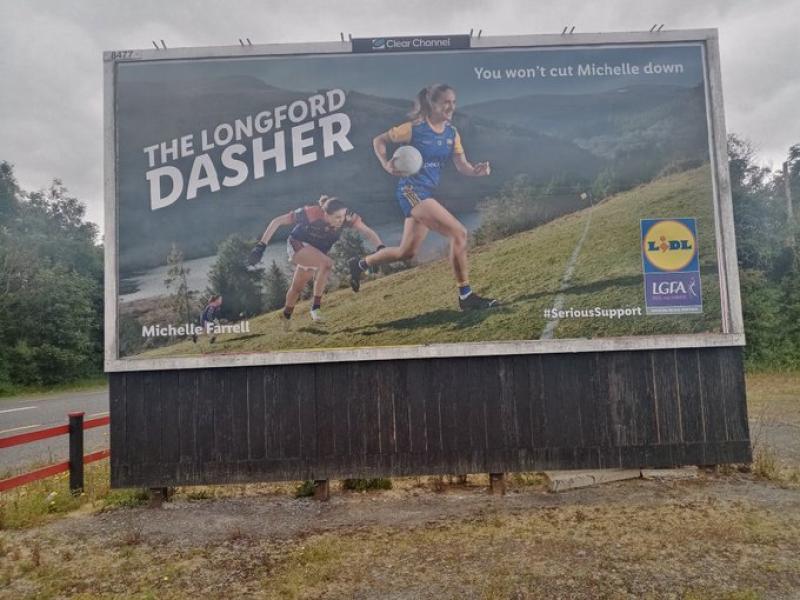 One Billboard outside Longford... Longford ladies football star Michelle Farrell from Colmcille in the spotlight in this Lidl promotion

According to the manager Brian Noonan, the Longford ladies football team will be cast in the role of the underdogs when they face Clare in the TG4 All-Ireland Intermediate Championship quarter-final at St Brendan's Park, Birr this Sunday, throw-in 2pm.

Delighted to have achieved a couple of consecutive wins against Kildare and Roscommon in building momentum through the group stage, Noonan is quietly confident that the county girls can make further progress in the race for the Mary Quinn Cup.

“Last season we were fighting a relegation battle and now we are just a couple of games away from a place in the All-Ireland final at Croke Park.

“Ourselves and Wicklow are probably the surprise packets but there appears to be little separating the eight teams left in this year’s championship.

“We need to get the performance right against Clare who are considered one of the main contenders to win the title.

“Having said that, they suffered a surprise defeat against Louth in the group stage and are something of an unknown quantity as there was no Intermediate championship in Munster.

“Clare were given the opportunity to play in the Connacht Championship and while they were not permitted to actually win the competition they showed up well in convincing wins against Roscommon, Leitrim and Sligo.

“It’s a tough draw for us but we are not far off it in terms of being in the hunt for All-Ireland honours and hopefully we will perform to the best of our ability against Clare.

“The back-to-back wins over Kildare and Roscommon was a major boost for the confidence factor and we are going in the right direction,'' commented the Longford manager.

While Clare were operating at a higher level in Division 2 of the Lidl National League this season, it turned out to be a disappointing campaign as they suffered defeat against Laois (2-12 to 2-7), Kerry (1-13 to 0-9) and Tipperary (0-13 to 1-7) in the group stage and ended up losing the subsequent relegation play-off against Tyrone on a 3-17 to 1-15 scoreline.

Taking into account that Kerry and Tipperary are in the senior grade, Clare will rightly feel that they are capable of winning the All-Ireland Intermediate title and were emphatic 1-17 to 0-9 winners over Down in the opening round of the current championship.

The slender one point setback (2-8 to 1-10) against Louth in the next round was a wake up call for the girls from Clare and a warning against any complacency that might creep into their frame of mind.

Clare lost by 3-11 to 2-11 against the eventual All-Ireland Intermediate champions Westmeath at the quarter-final stage last year and are a stern test for Longford in the battle for a spot in the semi-finals against Laois or Wicklow.