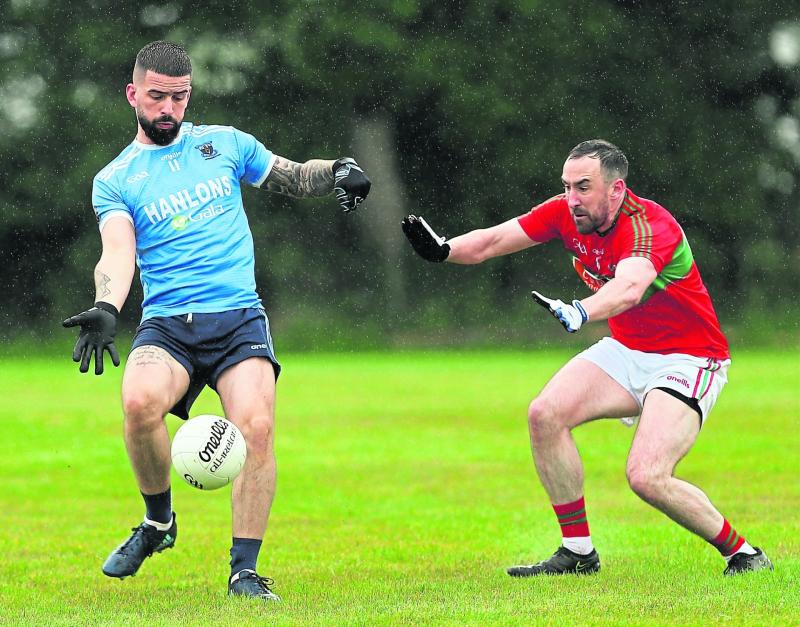 Joe Kelly on the ball for Slashers in facing the challenge of Mostrim defender Shane Kiernan. Action from the Division 1 league game at Michael Fay Park Photo: Syl Healy

Former Ardagh and Longford footballer Liam Keenan is the new manager of Slashers this season and the sky-blues continued their good form with a hard earned win over Mostrim at Michael Fay Park on Saturday evening last.

The second half of the Division 1 league will be a lot more competitive with the return of the county players and one of those, Darragh Doherty, was particularly impressive for Edgeworthstown as he fired over a total of six points (two frees).

Slashers had a definite edge for most of this entertaining encounter and the victory was secured when a brilliant pass from Cian O’Nuallain picked out the unmarked Andy Dalton who planted the ball in the back of the Mostrim net in the 54th minute.

Moments earlier Andy Devine scored a well-taken goal for the visitors to close the gap to just two points (1-12 to 1-10) and it was at this stage that Slashers were restored to 15 players after Peter Lynn received a black card midway through the second half.

Mostrim almost scored a second goal in the final minute of normal time but Seamus Hannon, after making a great catch in front of the posts, was denied by a fabulous double save by the Slashers keeper Danny Monks.

The home side dominated most of the first half and while they were guilty of kicking several wides they still ended up in a fairly comfortable 1-7 to 0-5 lead at the break with former Ballymahon player Joe Kelly scoring the goal in the 16th minute.

Six of the seven Slashers points were registered by the Clarke brothers Sean (3), Robbie (2) and Conor while Darragh O’Connell also got his name on the scoresheet.

The Mostrim points in the first half were shared by Darragh Doherty (2) and Brian Farrell (3) with their keeper Evan Hogan making a great save to deflect a goal attempt from the influential Slashers forward Sean Clarke over the bar in the 23rd minute.

Doherty and Farrell converted further frees in the early stages of the second half and after Cian O Nuallain got a score for Slashers, a point apiece from Doherty and Tiarnan Hussey brought Edgeworthstown right back into contention.

Holding a slender 1-8 to 0-9 advantage, Slashers then stepped up another gear to shoot four points in a row, the first from Darragh O’Connell after the Mostrim netminder Hogan produced a fine point-blank save to prevent Sean Clarke from getting a goal in the 40th minute.

Cian O Nuallain, Sean Clarke and Robbie Clarke (free) were all on target again as Slashers regained control but the black card for Peter Lynn in the 44th minute gave Mostrim a glimmer of hope as they reduced the deficit.

A point from Darragh Doherty was followed by the Andy Devine goal in the 53rd minute but Slashers hit back immediately with a goal from Andy Dalton to clinch the victory.

Substitute Sean Morgan then shot over the bar to extend the advantage with Padraig Joyce and Doherty accounting for a couple of late consolation points for Mostrim.