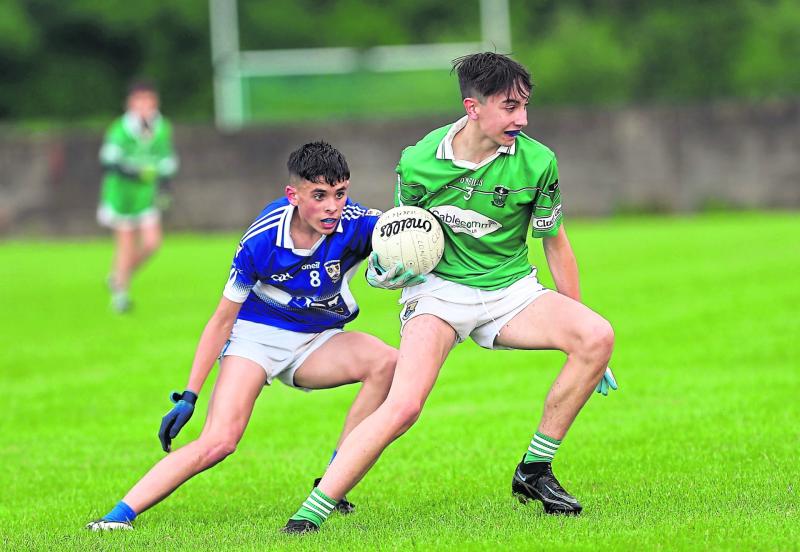 Looking in serious trouble after conceding four goals in the first half, Clonguish staged a great comeback in gradually getting the better of Granard in a cracking U-15 Football League Division 1 Cup Final at Allen Park on Thursday evening last.

In a highly entertaining game, Granard appeared to be in control after leading by the comfortable margin of eight points at the break but Clonguish (minus the injured Josh Marsh and Alan Mimnagh) dominated the second half on their way to winning the Michael ‘Smiler’ Fay Cup.

Powered by the physically strong pairing of Cormac Flynn and Michael McDonagh at centrefield, there was just no stopping Clonguish who added another 2-9 to their tally while Granard were restricted to just four more points and all from frees converted by Cian O’Donnell (3) and Brendan Martin.

The gallant losers got off to a flying start with O’Donnell blasting a penalty to the roof of the net in the 3rd minute and further goals followed from Ben Blessington, Jacob Gaynor Brady and Martin, the latter on target with 24 minutes gone on the clock.

While Clonguish were trailing by ten points, they were creating plenty of chances and somehow failed to score a goal in the first half with the Granard keeper Adam Murphy producing three excellent saves.

Four of the Clonguish points in the first half (three frees) were fired over by the always prominent centre-half-forward James Hagan with Eanna Madden, Cormac Flynn and Peter Toher (2) also getting their names on the scoresheet.

The talented Granard attacker Cian O’Donnell accounted for three of the Granard points (two frees) with Conor O’Hara also shooting over the bar in the first half.The boys in blue were looking good, going into the second half with a comfortable advantage (4-4 to 0-8), but the course of the game changed completely on the changeover.

After closing the gap with a point apiece from the lively Peter Toher (always a threat) and Seamus Hagan, Clonguish were awarded a penalty but the kick taken by Cormac Flynn was saved by the opposing keeper Murphy.

The alert Cormac finished the rebound to the net for a crucial goal and after a shot by Toher hit the crossbar, Mark Cooney landed a brilliantly struck ‘45’ before James Hagan converted a free to leave just the minimum of margins separating the sides, 4-4 to 1-12.

Clonguish took the lead when Michael Glennon, another key figure in the success for his side, surged forward to plant the ball in the back of the net in the 42nd minute.

The force was firmly with the home club who pushed on to score another five points - the first from Luke Shepherd whose shot was parried over the bar by the outstanding Granard keeper Adam Walsh.

The other points were registered by Rory Flynn, James Flynn, Peter Toher (when a goal was on) and James Hagan as Clonguish came out on top in a fine game of football with not a negative tactic in sight.

The future is bright for both clubs.