Season over as Longford fail the Tailteann Cup test 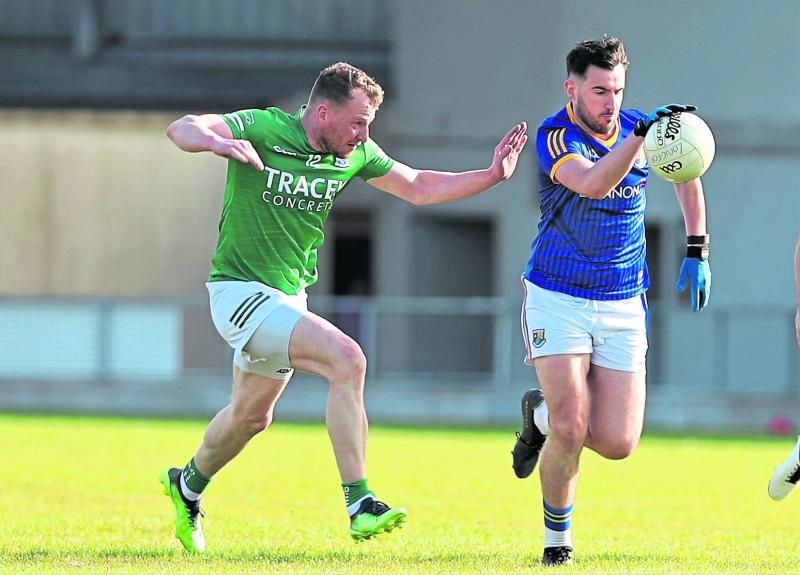 Mark Hughes on the attack for Longford in breaking away from Fermanagh opponent Aidan Breen. Action from the Tailteann Cup Round 1 clash Photo: Syl Healy

In the new second tier competition embraced by both counties who approached the match in a serious frame of mind, Longford were floored by a late, late Fermanagh goal in the Tailteann Cup Round 1 North clash at Glennon Brothers Pearse Park.

On a glorious Saturday evening, weather wise, Longford were just a point behind and searching for the equalising score but suffered a shattering blow in the final minute of normal time when Ultan Kelm broke through to shoot past Paddy Collum.

There was no way back for the home county in this disappointing early exit as their inter-county season ended on a sour note.

Leading by 0-5 to 0-1 at one stage in the first half and looking good in the first ever senior football championship between the counties, Longford eventually lost out in a tight contest and were left to rue a number of costly missed chances.

The vociferous away fans among the 1,000 plus attendance actually outnumbered the home followers and the Fermanagh roar really inspired their team, particularly in the second half when the course of the game gradually changed.

Thus the Longford boss Billy O’Loughlin and his extended backroom team were left to reflect on a mixed season that failed to yield a home win in the five fixtures at Pearse Park that was once labelled a ‘fortress’.

At least the Division 3 status in the National League was secured and while the mentors introduced a lot of young players into the fold the learning process will continue during the current transition period.

Longford failed the Tailteann Cup test and O’Loughlin pointed to the greater physical strength of the tough opposition.

“Fermanagh had too much power for us. We had goal chances and didn’t take them, whereas they took their goal chance,” the Laois native stated.