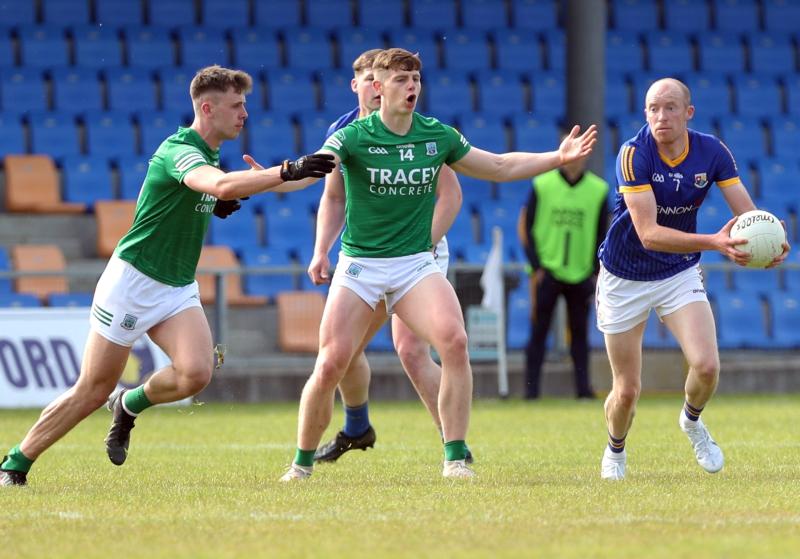 Barry O'Farrell on the ball for Longford against Fermanagh in the Tailteann Cup Round 1 game at Glennon Brothers Pearse Park Photo: Syl Healy

Longford suffered a knock-out blow in the first round of the Tailteann Cup in getting floored by a late, late Fermanagh goal at Glennon Brothers Pearse Park on Saturday evening.

The visitors were leading by a single point when Ultan Kelm struck for the killer score in the final minute of normal time and there was no way back for Billy O’Loughlin’s side in this disappointing early exit from the new second tier senior football championship as their inter-county season ended on a sour note.

Prior to the decisive Fermanagh goal, James Moran had a goal attempt blocked down when he should probably have opted for the equalising point and there were other costly chances squandered in the second half of this tight contest.

Both counties were reduced to 14 players during the course of this ultra defensive game, both for black cards, and first to be dismissed was Fermanagh centre-half-forward Conall Jones in the 28th minute of the first half.

Even at that Longford had to be content with a slender 0-6 to 0-4 lead at the break after enjoying the greater share of the possession but the only forward to get his name on the scoresheet was the impressive Keelin McGann whose quick pace created considerable problems for the Fermanagh defence.

McGann broke through on another of his exciting penetrating runs in the early stages of the second half but was denied a goal when his well struck shot was tipped over the bar by the opposing keeper Sean McNally as the Longford lead was extended.

Fermanagh then stepped up another gear to fire over five points in a row between the 39th and 51st minutes to take the lead (0-9 to 0-7) and would have scored a goal during this dominant period but for a brilliant point-blank save from Paddy Collum.

The Fermanagh cause was certainly helped when Longford defender Ryan Moffett received a black card in the 41st minute but a determined revival materialised when his side were restored to 15 players.

A brace of points from impact substitute Mark Hughes, along with another fine score from Moffett, left the sides all square before Fermanagh regained the lead with a point from a free converted by Quigley in the 64th minute.

A draw and extra-time was looking the likely outcome before the always dangerous attacker Ultan Kelm got the goal to settle the issue and Fermanagh just about deserved to advance a stage further in the Tailteann Cup.

Longford finished the game with 14 players when Keelin McGann was branded with a black card in the first minute of stoppage time, moments after the killer goal from Kelm.