Physically stronger Louth the superior side at Croke Park 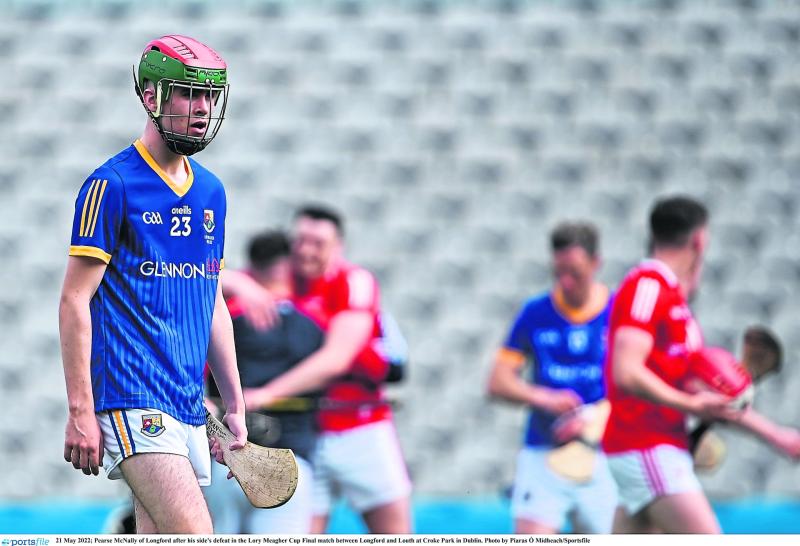 The Longford hurlers suffered the bitter disappointment of falling at the final hurdle in their quest for Lory Meagher Cup glory against a physically stronger Louth side in the Senior Championship title decider at Croke Park on Saturday last.

Even the boost of a brilliant start which left Longford leading by 1-2 to 0-0 with seven minutes gone on the clock, the goal coming from Joe O’Brien, was not enough to stop rampant Louth who were superior in most positions of the pitch.

The Wee County were winning most of the puck-outs as they gradually stamped their authority on the match and their greater experience at Croke Park proved to be a decisive factor as Longford found the going too tough.

It was just not to be for Adrian Moran’s charges who enjoyed a bright season that was full of hope but this comprehensive defeat was hard to take, not forgetting that the midlanders also lost to Fermanagh in the National League Division 3B Final.

Backboned by most of the team that won the Lory Meagher Cup in 2020, Louth were in the ascendancy from the moment they scored their first goal through Seaghan Conneely in the 12th minute and were looking good when their dangerous full-forward Paul Matthews planted the ball in the back of the net in the 26th minute.

That left Louth 2-5 to 1-2 in front and after going some 20 minutes without a score a strong Longford revival yielded four points in a row - three excellent efforts (one ‘65) from prominent midfielder Paddy Lynam who was doing his best to haul his team back into contention.

Cian Kavanagh also got his name on the scoresheet as the gap was closed to just two points (2-5 to 1-6) but Louth pulled away to establish a fairly comfortable 2-9 to 1-7 advantage at the break.

The other Longford points in the first half were registered by Cathal Mullane, Reuben Murray and Lynam,  the latter converting a free in the 34th minute, and while it  remained fairly competitive as the second half progressed, the killer blow was eventually struck as Louth snatched a third goal.

A speculative delivery from substitute Niall Keenan evaded the advancing Longford keeper Conor Gallagher and the breaking ball was scrambled over the line by Matthews in a tussle with opposing full-back Enda Naughton in the 48th minute.

That left Louth in a commanding 3-14 to 1-11 lead with four of their points in the early stages of the second half fired over by their chief marksman Darren Geoghegan who ended up with a total of 0-9 (six frees) to his credit.

Their other lethal attacker Feidhleim Joyce clocked up four points (all from play) in the second half and Longford were trailing by 3-18 to 1-11 before Reuben Murray struck to score a badly needed goal in the 58th minute.

The four points in the third quarter of the contest came from Joe O’Brien (play), Paddy Lynam (two frees) and Emmet Corrigan but Longford were always fighting a losing battle.

But they stuck it out to the bitter end and might have put a bit more pressure on Louth with a couple of other goal chances falling to Reuben Murray (whose shot was saved) and Joe O’Brien who was unable to get his close range effort on target as the ball ended up going wide.

Louth kept the scoreboard ticking over in landing some excellent points in the closing stages of the game with three of their substitutes on the mark but there was some late consolation for Longford when defender Enda Naughton surged forward to fire home a goal in stoppage time.

There were other points for the gallant losers in the second half from Joe O’Brien (free), Emmet Corrigan and Reuben Murray but they were well beaten by a much better Louth team on the day.

The absence of the injured captain Johnny Casey (broken collar bone) was a definite blow but the spirited Longford hurlers can look ahead with considerable confidence to next season in the bid to go that one step further in both the championship and the league.