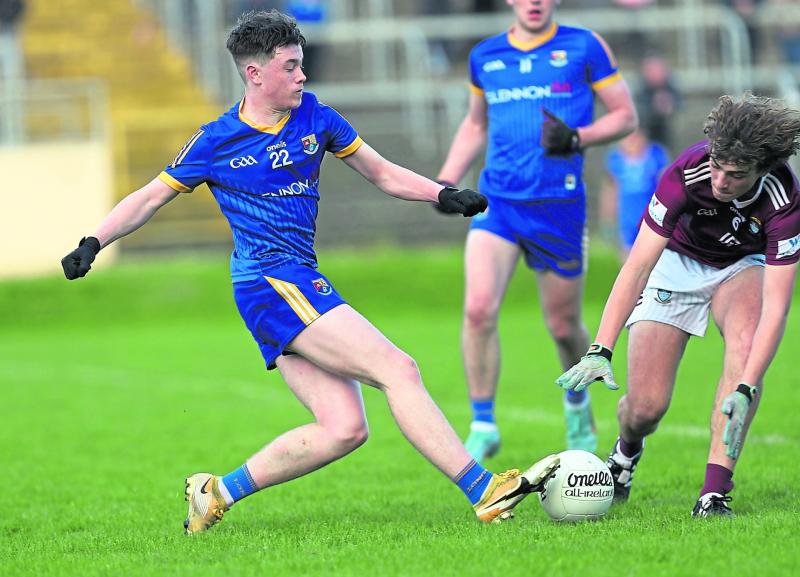 Josh Kelly pictured in action for the Longford minors against Westmeath in the Seamus Heaney Cup quarter-final Photo: Syl Healy

With no pressure in the consolation Seamus Heaney Cup second tier competition, a wide open game materialised at Glennon Brothers Pearse Park on Wednesday evening and it was Westmeath who came out on top with five points to spare at the final whistle.

Longford were shattered by the concession of four goals in the first half as they ended up trailing by 4-4 to 1-8 at the break with Michael Flynn scoring the goal for the home county in the 18th minute.

Powerful full-forward Shane Ormsby, who was causing havoc, registered two of the decisive Westmeath goals with Peter Murphy and Jack Duncan also shooting to the net and it developed into a real uphill battle for Gareth Johnston’s rattled side.

With the visitors making a strong start to the second half in adding four more points to their tally through Ormsby, Shane Corcoran (2) and Peter Ballesty, it was becoming a mission impossible for Longford.

Westmeath had established a commanding ten point lead (4-12 to 0-11) with 55 minutes gone on the clock before a fisted goal from Michael Flynn closed the gap.

Longford, to their credit, produced a very determined comeback in the closing stages of the match and were unlucky not to score another couple of goals.

Matthew Carey, who fired over three points in a frantic finish, had a close range goal attempt very well saved by the opposing  keeper Callum Butler Dolan while Longford also hit the crossbar but time ran out in the conclusion of their provincial campaign.