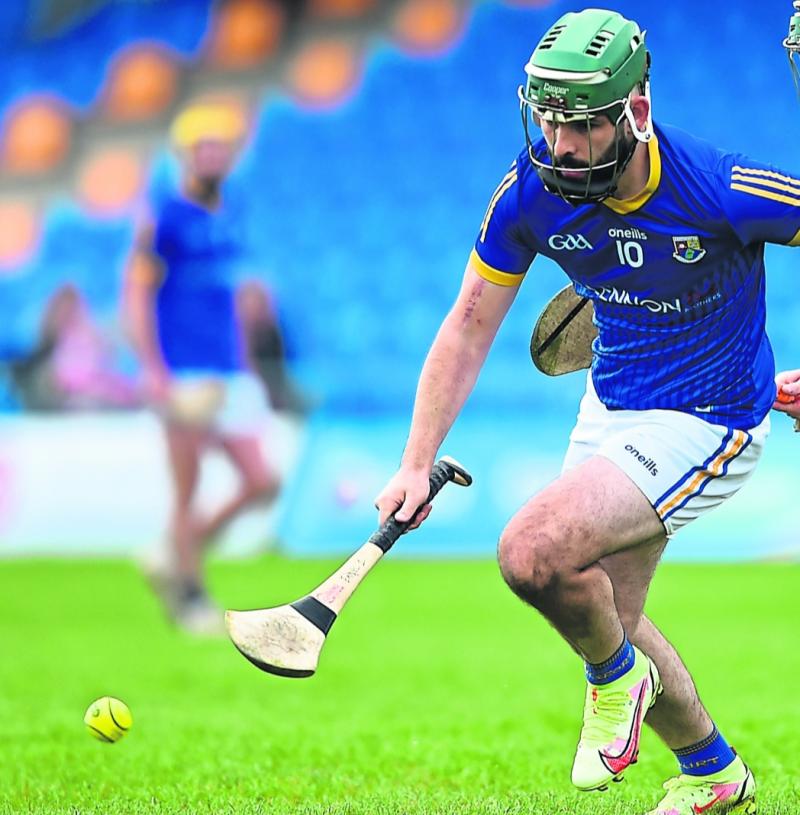 Emmet Corrigan pictured in action for the Longford hurlers

The Longford senior hurlers are on the verge of qualifying for the Lory Meagher Cup Final after winning a thriller away to Monaghan at the Inniskeen grounds on Saturday last.

Now level on points with Leitrim at the top of the group stage table, Longford look poised to secure their place in the Lory Meagher Cup final for the first time since 2014 when they take on Cavan (who have lost all their games) at Kingspan Breffni Park this Saturday, throw-in 12.30pm.

Barring a surprise defeat against Cavan in the remaining group fixture, the Longford hurlers will be heading to Croke Park on May 21/May 22 for the senior championship title decider against Leitrim or Louth who meet in Ballinamore this weekend.

Monaghan had been in pole position after three rounds but they were docked four points after it emerged that they had fielded an ineligible player in their first two wins of the competition.

That left the home side effectively playing to stay in contention and their task became more difficult when goalkeeper Hugh Byrne was sent off just after the half-hour mark.

Goals by Reuben Murray and Cathal Mullane had Longford in command at that stage but Monaghan responded with an unanswered 1-5, the goal coming from Mark Treanor.

Longford rediscovered their scoring touch in the final quarter, however, with a series of points from Joe O’Brien helping them claim their third consecutive win in yet another tight finish.

With Monaghan relying on Mark Treanor to keep them in touch early on, Longford had a greater spread of scores, as Joe O’Brien, Karl Murray and Cian Kavanagh all hit points to earn them a narrow lead.

The visitors moved four clear in the 15th minute when Reuben Murray fired home the opening goal after Monaghan had coughed up possession deep inside their own half.

O’Brien and Treanor evenly shared the next six points, before the game turned very much in Longford’s favour around the half-hour mark, with Cathal Mullane’s goal moving them seven clear and Monaghan losing goalkeeper Hugh Byrne following an off-the-ball incident.

Longford were unable to immediately capitalise, however, and instead it was Monaghan who finished the first half on the front foot, with points by Conor Gernon, Niall Garland and James Slevin bringing them back within four at the break: 0-8 to 2-6.

Monaghan looked on slightly surer ground when they began the second half with 1-2 to edge ahead for the first time since the opening minutes. Declan Hughes and Treanor accounted for the points before the latter drilled home his fourth goal in as many games.

Longford hadn’t scored since their opponents had been reduced to 14 men, but a brace of fine points by Paddy Lynam (one free) and two in the space of a minute by Emmet Corrigan got Adrian Moran’s side back on track by the three-quarter mark.

Monaghan suffered another blow when the influential Treanor had to limp off and although Aaron Kenny ably took over free-taking duties to convert four from four, their only other score of the final quarter came from pacy substitute Shane Slevin.

Longford’s last five points during a frantic finish were all from play, with top scorer Joe O’Brien adding three to his tally and Cathal Mullane shooting the other two, including a spectacular long-range effort during added time.