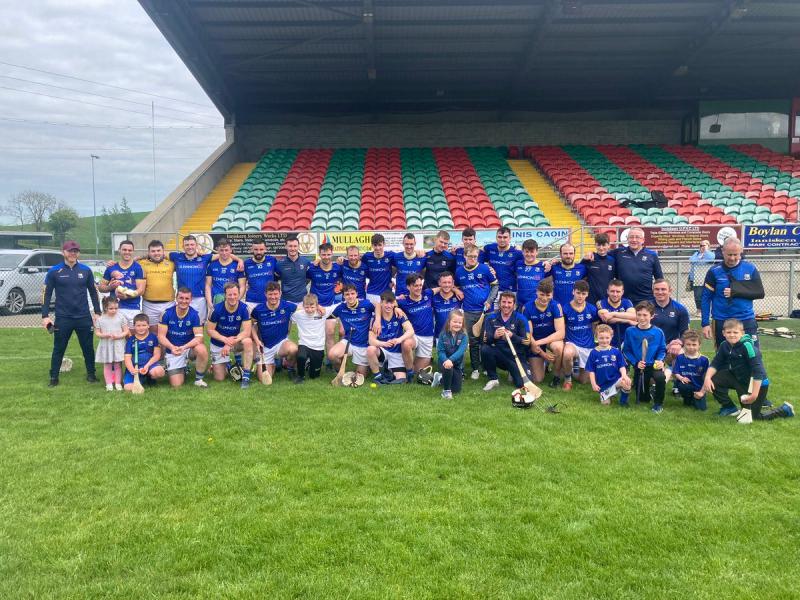 The Longford senior hurlers, mentors and young supporters pictured following the terrific win over Monaghan in the Lory Meagher Cup

The Longford  hurlers moved a step closer to Lory Meagher Cup glory when they showed their usual fierce resilience to master Monaghan in the Round 4 clash at the Inniskeen grounds on Saturday.

Barring a surprise defeat away to Cavan in the remaining group fixture on Saturday next, Longford will be heading to Croke Park on Saturday May 21 for the senior championship title decider against Leitrim or Louth.

The original table toppers Monaghan came into this crunch clash under a dark cloud as the CCCC of the GAA confirmed that following an investigation into the involvement of an ineligible player in the recent Lory Meagher Cup games against Cavan and Louth, the relevant penalties provided for in rule have been applied (these include forfeiture of game but without award to the opposing team).

Monaghan have accepted this penalty meaning under rule they lose four points collected in those victories leaving them with two points in the table standings and are now out of the Lory Meagher Cup after losing to Longford.

Thanks to goals from Reuben Murray (14th minute) and Cathal Mullane (32nd minute), Longford ended up leading by 2-6 to 0-8 at the break with Monaghan now down to 14 players following a red card for their keeper Hugh Byrne.

Byrne clashed with a Longford player following the disputed Mullane goal and Longford then suffered a setback when their captain Johnny Casey was forced to retire after sustaining a shoulder injury with three minutes gone in the second half.

It was a real ding-dong battle during the remainder of this exciting match with a goal from Mark Treanor bringing determined Monaghan right back into contention and they actually took the lead despite the numerical disadvantage.

But brave Longford were not going to be denied and showed a lot of character in coming out on top by the narrow margin of two points in the finish.