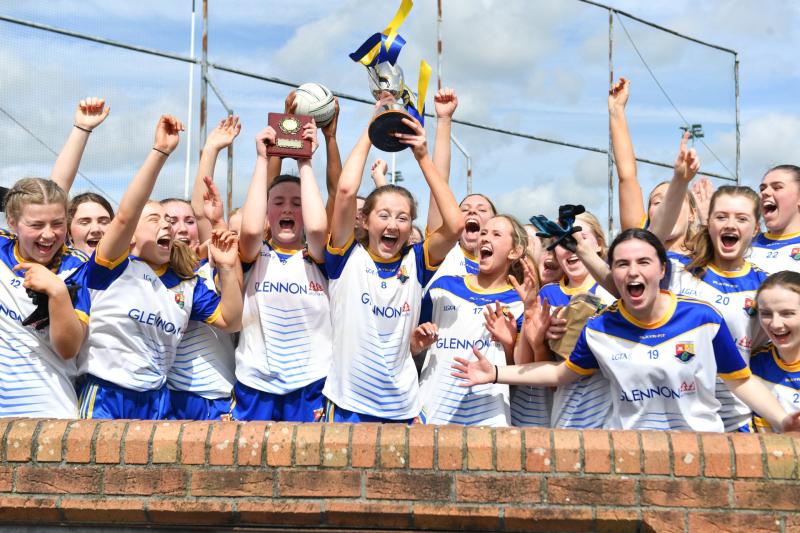 The Longford ladies U-16 footballers celebrate following their fine win over Wicklow in the Leinster 'C' Final Photo: Frank McGrath

From the moment wing back Sarah McCormack scored a crucial goal in the early stages of the first half, the force was with Longford who proved too strong for Wicklow in the Ladies Football Leinster U-16’ C’ Championship Final.

Played in perfect conditions at the Gracefield GAA grounds, Co Offaly on Saturday last, Longford ended up leading by seven points at the break (1-5 to 0-1) but it would have been a lot closer but for some poor finishing by Wicklow including a glorious clear-cut goal chance.

The Garden County, who had to wait until the 22nd minute for the opening score when Aine Darcy broke through to shoot over the bar, produced a strong finish to the first half in a determined bid to get back into contention.

While a bright start to the second half for Wicklow yielded another point from Darcy, Longford gradually got back on top and three points (two frees) in quick succession (the first in the 44th minute) from the player of the match Sarah McCormack settled the issue.

The midlanders registered another four scores through Sian Gallagher, Maria Farley and a brace from substitute Jodie Robinson to run out emphatic winners and can now look forward to the All-Ireland U-16 ‘C’ semi-final at the end of June.

Wicklow grabbed a consolation goal in the fourth minute of stoppage time when substitute Naomi Hunter finished the ball to the Longford net.