Superior Westmeath too strong for Longford in the Leinster Championship

Next up the Tailteann Cup for the defeated County senior footballers 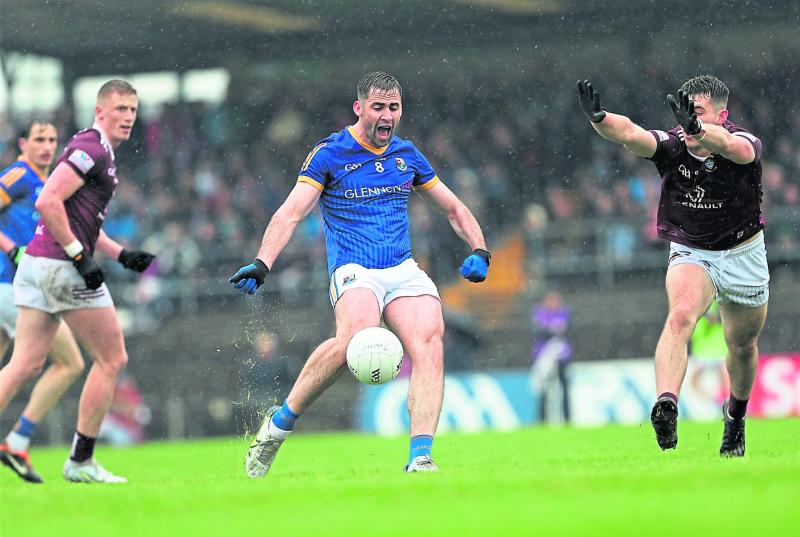 In serious trouble after producing a very poor first half performance which left them trailing by eight points at the break (1-9 to 0-4), that same wide margin separated the sides in the finish as Longford crashed out of the Leinster Senior Football Championship and will now focus their attention on the inaugural Tailteann Cup.

Adapting a lot better to the difficult conditions at TEG Cusack Park on a miserable wet Saturday evening in Mullingar, the physically stronger Westmeath side were superior in most positions on the pitch and can now look forward to a semi-final showdown against Kildare in a couple of weeks time.

Showing a fierce desire to make amends for the disappointing defeat against Longford in the National League Division 3 clash at the same venue a couple of months ago, a surprise setback which cost them promotion, Westmeath recovered from a shaky start to stamp their authority on the Leinster quarter-final game which developed into a damp squib.

It was becoming extremely embarrassing when Ronan O’Toole (introduced as a temporary replacement for powerful midfielder Ray Connellan) scored the second goal for Westmeath midway through the second half and at that stage the struggling Longford side were a massive twelve points adrift, 2-11 to 0-5.

With Westmeath sitting back on the cushion of such a commanding lead, the underdogs eventually began to show some bite and fired over six points in a row through Dylan Farrell (two frees), Darren Gallagher (a cracking strike from play), Darragh Doherty, goalkeeper Paddy Collum (from a ‘45) and Keelin McGann between the 50th and 62nd minutes.

But the goal that Longford so badly needed failed to materialise and while some chances were created with the competent Westmeath  keeper Jason Daly making a couple of fine saves, the danger was cleared by a resolute opposing defence as the gap was closed to six points, 2-11 to 0-11.

The pressure was eased on Westmeath when Connellan fired the ball over the bar in the 64th minute to relieve the anxiety and a point apiece was then exchanged between Gallagher (free) and Lorcan Dolan.

Longford went agonisingly close to snatching a goal in the final minute of normal time when the ball broke to Kevin Diffley in front of the posts but his effort from a few yards out went over the bar in what was a very lucky escape for Westmeath who were living dangerously in the final quarter of the contest.

The tale of woe was complete for Billy O’Loughlin’s charges when Westmeath substitute Robbie Forde finished the ball to the net in the second minute of stoppage time to round off this emphatic win for the Lake County.

Longford had the last say when Dylan Farrell converted another free just before the final whistle was blown and while it remains to be seen what will happen in the second tier championship that starts in a few weeks time, the rebuilding will continue during this transition period and hopefully things will improve.

With Joseph  Hagan (who scored 1-6 from play in the final league game against Laois) missing at this moment in time after departing to the United States for a few months, Longford were also forced to field without the injured Jack Duggan and the talented  forwards were a definite loss.

This was always going to be a very tough battle against a Westmeath team with the greater experience and so it proved.

Having said that, Longford got off to a flying start to lead by 0-3 to 0-1 with nine minutes gone on the clock with Westmeath slow to settle in the local derby.

Newcomer Daniel Reynolds (making his first start) landed the opening score and further points followed from Michael Quinn and Dessie Reynolds, much to the satisfaction of the away supporters who braved the adverse wet weather conditions.

But the Longford followers had little to shout during the remainder of the first half as their side failed to register another score for 25 minutes as their defensive game plan backfired in facing the wave of constant Westmeath attacks.

Longford were unfortunate not to get a goal in the 21st minute when Jayson Matthews fisted the ball against the crossbar while Daniel Reynolds was unable to connect with a dipping shot from Mark Hughes in the 27th minute in another attempt to find the back of the net.

The fact that Longford failed to register a single wide in the first half is a clear indication as to just how dominant Westmeath were once they got going.

Alex Gardiner fired over their opening score in the 7th minute and after that it was the John Heslin show as the class attacker clocked up 1-4 with three of his points coming from frees.

Heslin landed a glorious point from play and the roving Westmeath full-forward grabbed his goal in the 28th minute, planting the ball in the net after Longford keeper Paddy Collum had produced a point-blank save to stop a shot from Gardiner.

The dangerous Gardiner kicked over another two points, along with a cracking couple of scores from left-half-back Nigel Harte, and Westmeath could afford the luxury of shooting five wides in the first half.

It could have been even worse for Longford as Westmeath full-back Kevin Maguire surged forward just after the Heslin goal but his deflected goal attempt was well saved by Collum.

Longford had to wait until the 34th minute for their next score, a free converted by Gallagher as the barren spell was ended, and the match was realistically all over at the break with rampant Westmeath eight points ahead.

A strong start to the second half by the home county yielded two more points through Ray Connellan and John Heslin (free) and Longford defender Andrew Farrell then pushed forward to engineer a goal chance but his shot was deflected wide of the post in the 44th minute.

Moments later Darren Gallagher converted a ‘45 but whatever hopes Longford had of staging a dramatic comeback were dashed when Ronan O’Toole struck to score a killer second goal for Westmeath in the 49th minute: 2-11 to 0-5.

The losers, to their credit, tried hard to give the scoreline a more respectable look during the remainder of the match as they outscored Westmeath 0-9 to 1-2 and also kicked five wides but the damage was already done.

Westmeath also squandered a number of chances in the second half in cruising to their expected victory and this was a reality check for a Longford team who will now set out on the road to redemption in their bid for an extended run in the Tailteann Cup.