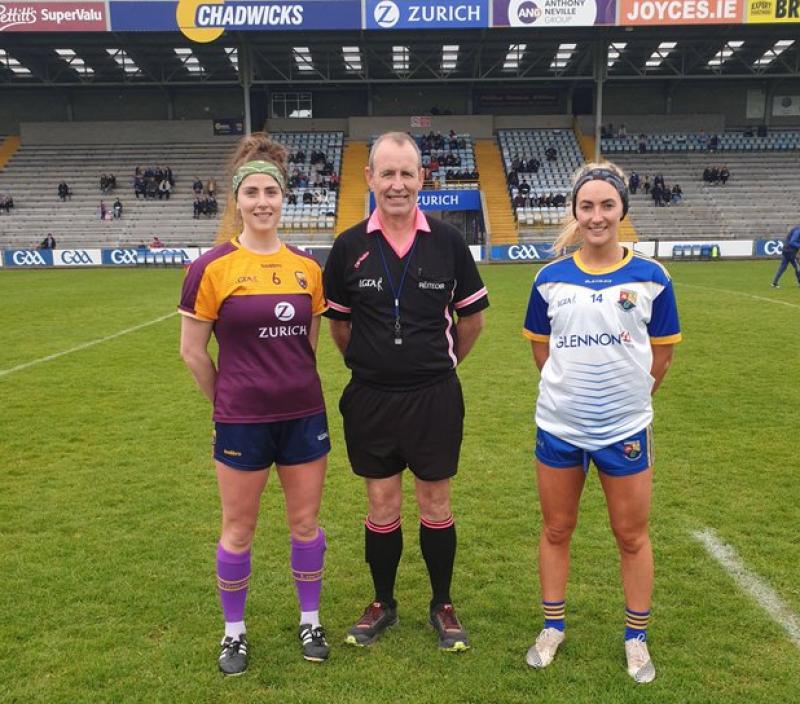 Sarah Shannon (right), the captain of the Longford ladies football team on the day, is pictured with the Wexford captain Roisin Murphy and the referee

Boosted by a brilliant start with a goal from Tara Doyle in the opening minute of the game, Wexford proved too strong for Longford to reach the TG4 Ladies Football Leinster Intermediate Championship semi-finals.

Brian Noonan’s side, who needed a win (or a draw) in the Group Stage Round 3 clash at Wexford Park on Sunday last to reach the last four, ended up trailing by 1-5 to 0-1 at the break.

The solitary Longford score in the first half came from a 5th minute free converted by Michelle Farrell who was later dismissed for a ten minute period after receiving a yellow card.

The loss of the always influential Farrell was a significant setback and there was really no way back for Longford when they conceded a second goal with just a couple of minutes gone on the changeover.

Aisling Murphy found the back of the net to put Wexford firmly in control and they extended their commanding advantage through a third goal from Catriona Murray in the 40th minute.

Longford tried hard to close the gap but they were fighting a losing battle with Wexford scoring a fourth goal in the 55th minute from a penalty converted by their top scorer Murray.

To their credit, Longford registered a total of seven points in the second half with three of the scores coming from Michelle Farrell.

Emer Heaney (2), Aisling Cosgrove and Grace Shannon were also on target for the midlanders who will now focus their attention on the All-Ireland Intermediate Championship in the aftermath of the disappointing Leinster exit.

A second Longford player was sent to the sin-bin in the closing stages of the game when goalkeeper Ruth Jones received a yellow card but no excuses can be made for this emphatic defeat as Wexford were the better team on the day in advancing to meet Laois in the provincial semi-final.