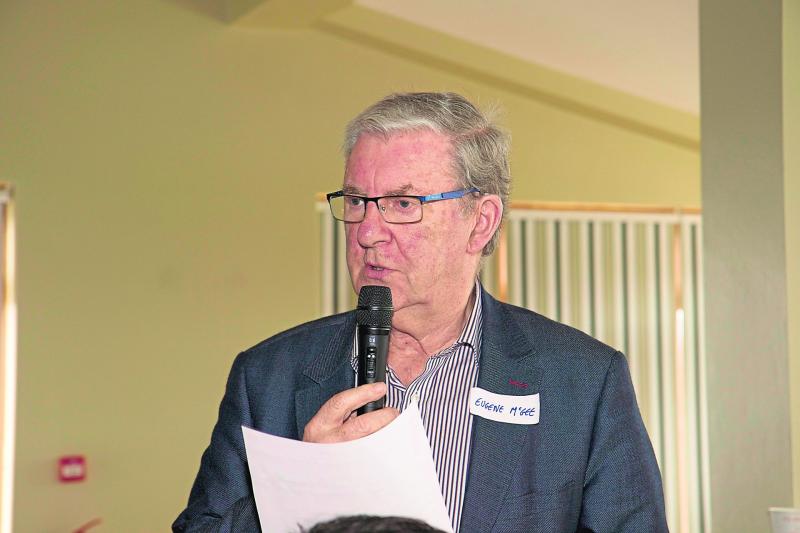 The late, great Eugene McGee who will be remembered by his club Colmcille at a special event at Fr McGee Park on Sunday next

Eugene’s sudden death on the 5th of May 2019 was a big shock to all but his memory lives on. Those times past will be recalled at a special event organised by his native Colmcille GAA club on Sunday next with Longford and Offaly clashing in a memorial match, throw-in 3pm.

The McGee family enjoyed a life long association with Colmcille GFC, with the excellent ground in Aughnacliffe decided to the memory of Fr Phil, and the picturesque north Longford venue will be packed for Eugene’s memorial day.

40 years ago Fr McGee Park was officially opened and Longford played Offaly in  a challenge match to mark the occasion.

GAA President Larry McCarthy will be in attendance at McGee Park on Sunday, along with some members of that famous Offaly team who scored a shock win over the then four-in-a-row champions Kerry in the All-Ireland senior football final 40 years ago.

A special presentation will be made by the McGee family with Eugene's and Marian's daughter Linda presenting the 'Man of the Match' award.

The main event on the programme is the meeting of Longford and Offaly in a warm up for the Leinster senior football championship and there will be a spring in the step of the home county following their tremendous win over Laois to secure Division 3 status in the National League.

Billy O’Loughlin’s boys are preparing for the eagerly awaited quarter-final clash against neighbouring rivals Westmeath at TEG Cusack Park in Mullingar on Sunday May 1 and part of the current county squad is Colmcille’s own Fergal Sheridan.

An underage exhibition match will take place during the half-time break.

Admission to the Eugene McGee Memorial Day is €10 and children are free.