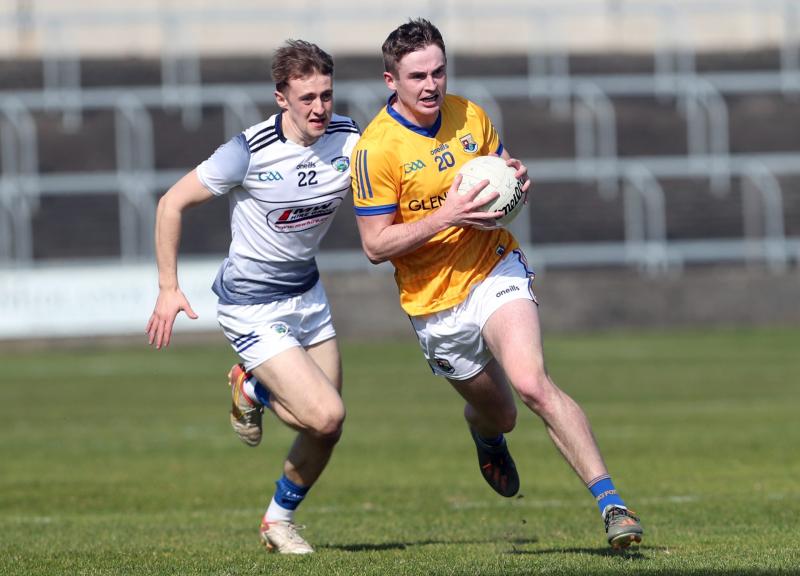 Dessie Reynolds on the attack for Longford against Laois. Action from the National Football League Division 3 clash at O'Moore Park on Sunday last Photo: Syl Healy

Knowing they had to win to keep alive their hopes of securing Division 3 status for a seventh successive season, Longford produced a tremendous performance to lash Laois at O’Moore Park on Sunday last.

The return of impressive duo Michael Quinn and Dessie Reynolds made a major difference and with Kevin Diffley also back on the starting team to pose a strong physical presence, rejuvenated Longford were firmly focused on achieving the result they required to complete the great escape from relegation.

With Louth scoring their expected win over Wicklow to clinch promotion, Longford ended up on the same number of points as Laois who dropped down to Division 4 on the head-to-head rule.

Laois native Billy O’Loughlin and his selectors Eugene McCormack and Declan Flaherty deserve considerable credit for guiding the county to survival and it was a big boost for the Longford boss in his first season in charge.

O’Loughlin certainly got the best out of his players in the make or break clash against Laois and all involved can now look forward with optimism to the Leinster Championship quarter-final against neighbouring rivals Westmeath in Mullingar on Sunday May 1.

Frequent waves of slick counter-attacks split the slack opposing defence wide open as Longford made the most of the scoring chances they created and were clinical in capitalising on the black card for Laois wing back Sean O’Flynn.

The home side led by two points (1-5 to 0-6) before they were reduced to 14 players in the 26th minute and Longford, with the numerical advantage, were completely dominant from there until the break.

This was the defining moment in a highly entertaining encounter played in perfect conditions in a championship style atmosphere and there was no stopping the visitors who scored a goal and four points during this period to hold a healthy 1-10 to 1-5 lead at half-time.

The points were fired over by Jack Duggan (free), Dessie Reynolds, Joseph Hagan and Darren Gallagher (free) and it was the always prominent Gallagher who cut in from the right to set up Reynolds for the crucial goal in the 28th minute.

Dessie flicked the ball to the net from close range and all of a sudden a rattled Laois side were reeling on the ropes.

Hitman Hagan was the star of the show in the first half in shooting five points from play and it was the razor sharp Dromard attacker (put through by Iarla O’Sullivan) who struck the killer blow when he scored the second goal for Longford with six minutes gone on the changeover.

That left Longford in a commanding 2-11 to 1-5 lead after Dessie Reynolds had burst  through to land a point in the opening minute of the second half and there was no way back for a disappointing Laois outfit who were guilty of squandering several chances during the course of the game.

Laois kicked a total of 18 wides, as compared to 7 for Longford, and the home county never really recovered from the collapse in the closing stages of the first half.

Longford, on the other hand, kept the scoreboard ticking over in adding a further six points to their tally in the second half through Jayson Matthews, Hagan, rock solid defender Andrew Farrell, Gallagher (two frees) and substitute Keelin McGann.

A couple of other good goal chances were squandered by the winners while Laois almost found the back of the net again late in the game, only to be denied by opposing keeper Paddy Collum who produced a fine point-blank save to keep out a shot from Gary Walsh.

It did not matter when Longford substitute Aidan McGuire was dismissed after receiving a black card in the 70th minute and this sparkling display certainly delighted the small band of loyal supporters who made the trip to Portlaoise.

Ironically, the Laois senior footballers have failed to win a game at O’Moore Park since February 2020 but they were looking good to break that bogey when Mark Barry got through to score a goal in the 16th minute despite the saving attempt by Paddy Collum.

That left Laois 1-4 to 0-5 in front with four of the five Longford points coming from Joseph Hagan while Oran Kenny was also on target.

Darragh Doherty also got his name on the scoresheet in the first half and this was a very bright day for Longford with almost everything going right in the fierce battle for survival, apart from the fact that defender Patrick Fox was unable to play.

The highlight for Laois was the three points scored by Mark Timmons in the second half.

The vastly experienced Timmons  started the game at full-back but was moved further outfield as part of the frantic bid to salvage the situation.

Corner-forward Mark Barry was their chief marksman with 1-4 to his credit with Gary Walsh (3), Eoin Lowry (2) and substitute Sean Moore were also on target for relegated Laois who started out the league campaign as one of the leading contenders for promotion.