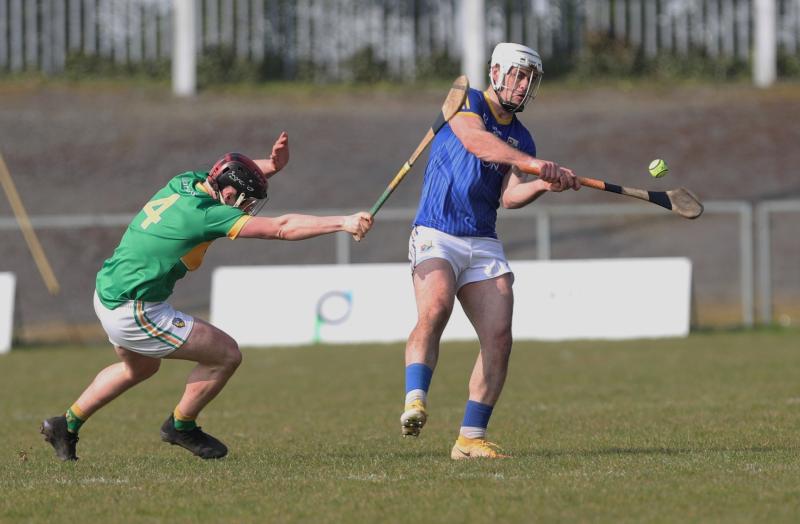 Karl Murray pictured in action for Longford against Leitrim in the NHL Division 3B semi-final at Glennon Brothers Pearse Park on Saturday last Photo: Syl Healy

Making steady progress under the guidance of their new manager Adrian Moran, the Longford senior hurlers produced their best performance this season to beat Leitrim by the wide margin of ten points in the National League Division 3B semi-final at Glennon Brothers Pearse Park on Saturday last.

Played in perfect conditions on a glorious sunny day, the home county recovered from the setback of conceding a goal with just 15 seconds gone on the clock to win with considerable comfort and  now face Fermanagh in the league title decider on Saturday.

Leitrim led by the minimum of margins (1-5 to 0-7) midway through the first half but Longford then clicked into top gear to fire over nine points in a row to change the course of the game.

The chief marksmen Joe O’Brien and Paddy Lynam (who registered a total of 14 points between them throughout the local derby) were in fine form as the clinical county hurlers ended up 0-16 to 1-7 in front at the break.

Whatever hopes Leitrim had of getting back into contention were dashed in the early stages of the second half when Longford corner-forward Emmet Corrigan worked his way through to score a goal with two minutes gone on the changeover.

Things went from bad to worse for the visitors a couple of minutes later when they were reduced to 14 players after their top forward Joe Murray received a straight red card for a challenge on opposing defender Enda Naughton.

Another ten points were added to the most emphatic Longford tally with Leitrim substitute James McNabola scoring a consolation goal in the 60th minute.

Longford will head into the league final in Carrick-On-Shannon on Saturday evening (throw-in 5pm) in a fairly confident frame of mind in their quest to collect some silverware and promotion to Division 3A of the National League next year.

When the counties clashed in the Division 3B group stage earlier in the season, Fermanagh scored a narrow win (1-10 to 0-11) at Glennon Brothers Pearse Park and Longford will be going all out to gain revenge in the match that really matters.

In refusing to be rattled by Leitrim’s lightning start which yielded the goal from Joe Murray direct from the throw-in, Longford gradually worked their way into a winning position and showed a lot of character in coming from four points down (1-2 to 0-1) early in the game.

The opening score was a cracking long range strike from Cian Kavanagh in the 2nd minute  and a second point soon followed from right-half-back Adam Quinn to settle the nerves.

Longford went on to outscore their neighbouring rivals during the remainder of the first half, shooting a total of 14 more points - five from Joe O’Brien (three frees) and four from Paddy Lynam (three frees and a ‘65).

Emmet Corrigan, Cian Kavanagh, Karl Murray, Reuben Murray and Cathal Mullane were also on target while four of the seven Leitrim points in the first half were registered by the accurate Joe Murray (one free).

Senan Keane, Gavin O’Hagan and Sean Markham also got their names on the scoresheet but Leitrim were fighting a real uphill battle in the second half after conceding a goal along with the dismissal of Murray.

Longford kept the scoreboard ticking over to shoot another ten points, four more from impressive midfielder Paddy Lynam (three frees and a ‘65), three from Rueben Murray, a terrific strike from Joe O’Brien with Sean Mulhern and Cathal Mullane also on the mark.

Leitrim kept plugging away in the face of adversity and their perseverance was rewarded with a total of 1-6 in the second half, the points coming from O’Hagan (two frees and a ‘65), Sean Markham (2) and substitute Diarmuid Kelleher who shot over the bar at the start of the second half.