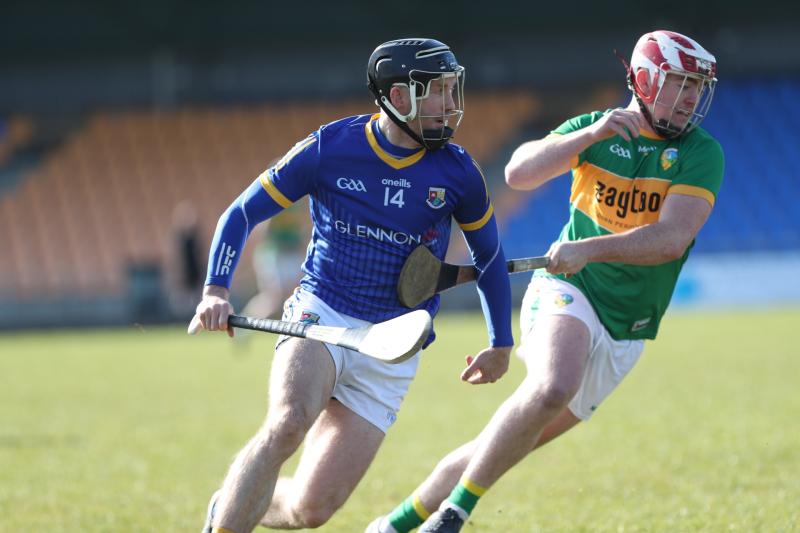 The Longford hurlers go into the National League Division 3B semi-final against Leitrim in excellent form, winning their third successive match as they conquered Cavan at Kingspan Breffni Park on Saturday last by the wide margin of eleven points.

Goals from Emmet Corrigan and Johnny Casey guided the midlanders to a comprehensive victory against Cavan who finished the game with thirteen players.

Playing with a strong wind in the first half, Longford raced into a 1-2 to 0-0 lead after just six minutes. Evan Tully and John Mulhern pointed for the visitors while Emmet Corrigan scored the goal.

Although it was a superb finish from Corrigan, the build-up to the green flag being raised was quite fortuitous. Longford were awarded a free which resulted in a fresh air attempt by Paddy Lynam but the midfielder quickly recovered to pick out Corrigan who cut in from the right flank and he fired the ball to the Cavan net.

Fiachra Hughes scored Cavan’s first point after eleven minutes with a thirty-yard effort from the right but Longford slotted over the next two scores courtesy of Reuben Murray and Adam Quinn.

Quinn's point was sublime as he ran onto a Cathal Mullane pass and split the uprights with a splendid strike to put Longford up by 1-4 to 0-1 in the 19th minute.

Cavan responded with the next two points through a James Smith free and a fine score from out on the right by Anthony Sheridan.

A glorious flowing move from Longford should have produced another point on the half-hour mark. Mulhern played an exquisite cross-field ball from the left to pick out Aidan Sheridan on the right and he cleverly set-up the advancing Cathal Mullane, only for the usually reliable forward to shoot narrowly wide.

Longford's Lynam with a sixty-yard score and another James Smith free for Cavan left four points between the sides after 34 minutes.

Cavan suffered a triple blow in first-half stoppage time. Emmet Corrigan added to his goal with a good point from play and then Lynam converted a free to give Longford a six point cushion at the break, 1-7 to 0-4.

The biggest blow for the home side came when defender Philip McCabe was shown a straight red card just before half-time.

Cavan  had reduced the deficit to just three points by the 50th minute as James Smith registered three unanswered points (two frees) in the early stages of the second  half.

Mullane and Hughes then swapped points as Longford led by 1-8 to 0-8.

Successive points from Reuben Murray and Lynam stretched the visitor's advantage and any hopes of a Cavan comeback win were dashed just before the hour mark when they were reduced to thirteen players as Anthony Sheridan was sent-off.

Longford pointed from another Lynam free and then they got their second goal in the 63rd minute when Cian Kavanagh set-up Johnny Casey, and the captain rattled the Cavan net from close range to put his side nine points clear.

Longford registered three more points in the closing stages with scores from Mullane, Lynam and Quinn while Smith got Cavan's last point of the contest.

Longford will have home advantage against Leitrim in the semi-final at Glennon Brothers Pearse Park on Saturday (throw-in 2.30pm) after the neighbouring rivals were narrowly beaten by two points by Fermanagh in Ballinamore last weekend with the Ernesiders automatically qualifying for the Division 3B final as table toppers.