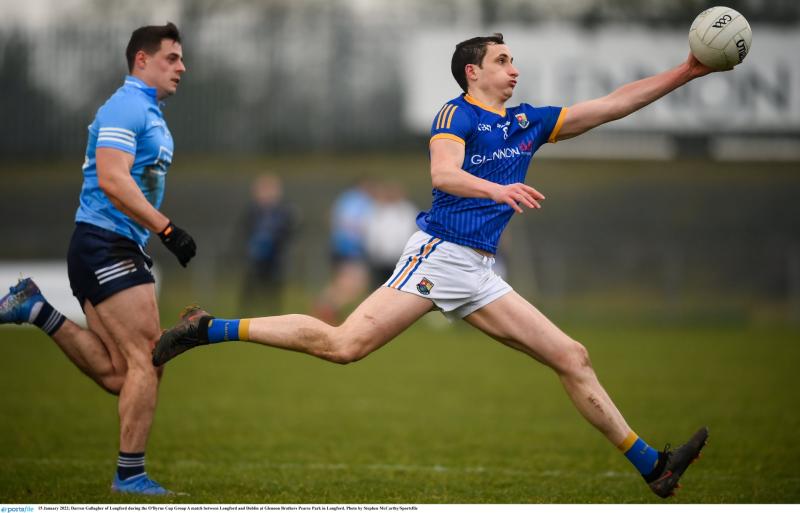 Darren Gallagher on the ball for Longford with Dublin opponent Brian Howard closing in to make a challenge. Action from the recent O'Byrne Cup game Pic: Stephen McCarthy/Sportsfile

There has been a real air of change in the Longford senior football squad during the O’Byrne Cup games against Louth, Offaly and Dublin.

Many young players have been given game time by new manager Billy O’Loughlin.

However, an anchor has been provided in the three pre-season games by the presence of powerful midfielder Darren Gallagher.

The vastly experienced Granard man has been a steadying influence in the games. Against Dublin, he once again provided leadership and underlined this fact with two inspirational second half points.

The quietly spoken Garda smiles when it is put to him that he is now one of the senior players on this Longford team.

“I was only saying it to one of the lads there that there was a time I used to be calling the likes of Dermot Brady and Barry Gilleran the ‘old lads’ but it doesn’t be long coming around!” he said.

“You need the freshness in the panel. There are some great footballers in Longford,” Gallagher added.

Reflecting on the game against Dublin, he called it a “decent performance” while stating that there was some “naivety” in Longford’s play.

“We were trying to skip through tackles at times, and you don’t get away with that against a big physical team like Dublin,” he commented.

“We made handling errors in this campaign and when you cough up possession at this level, then you can expect the ball to be going over your crossbar. But that also works the other way and when we turnover the ball, we need to be more ruthless,” Gallagher continued.

However, he saw positives in the O’Byrne Cup campaign overall.

“There were a lot of young players blooded and I thought that the O’Byrne Cup was positive overall for us,” he added.

Limerick in the first round of the National League is next on Longford’s agenda and Gallagher is under no illusions about the challenge awaiting the Blue and Gold down at the Gaelic Grounds this Saturday evening.

“We played a challenge against Limerick last year and they were tough opposition. We had to be at our best to try and get a result against them. Division Three will be difficult,  particularly with four away games, but we just have to get on with it,” he stated.

“Staying in Division Three is tough to start with, but if we tighten up, we can be there or thereabouts in the division,” he added.