One in 1,000 campaign for Cystic Fibrosis Ireland 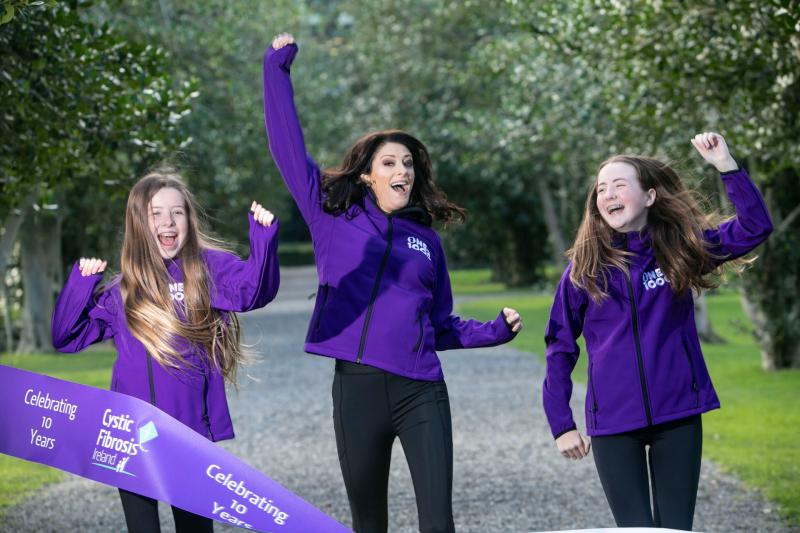 B*Witched and Dancing with The Stars’ Sinead O’Carroll  joined forces with Zoe Woodward, and her two girls Emily (14) and Lana (12) who both have Cystic Fibrosis, as they launched Cystic Fibrosis Ireland’s annual One in 1,000 campaign – encouraging 1,000 women to take part in the Vhi Women’s Mini Marathon on May 31 for the charity.

Sinead O’Carroll has swapped her dancing shoes for running shoes to raise awareness for CF.

She said: “My connection to CF goes way back to many years ago, when I had a close friend with the disease who told me that she would listen to B*Witched to cheer her up when times were tough and her health wasn’t great. I also taught Lana at my dance school in Greystones. That’s why I was eager to join the campaign and help out as much as I can!

The Vhi Women’s Mini Marathon is the largest all-women event of its kind in the world and represents one of Cystic Fibrosis Ireland’s largest annual fundraising campaigns.

Zoe Woodward is a parent of two girls with cystic fibrosis and is one of the original founders of the One in 1,000 campaign.

“CF was a devastating diagnosis for us, there was no history of it in either family and we were totally unprepared as we knew little about the disease.  As many other families with CF will understand our lives were literally turned up-side-down.  As first time parents we had tried to prepare ourselves as best as possible to care for a new born baby, we had never given any thought to the possibility that our tiny baby would come with a life threatening disease.  Lana was born two years later and was diagnosed immediately

“During their early years we had a number of stressful hospital admissions. Few cross-infection controls were in place and we would be placed on a general respiratory ward. In 2009, while pregnant with my third child, my mum, sister, two cousins and myself got together and decided we wanted to do something big to help children with CF. It was from this conversation that my cousin hit upon the idea of encouraging a large group of women to take part in the Women’s Mini Marathon. We knew that €200,000 was needed to complete a CF isolation ward in Our Ladies Children’s Hospital Crumlin, and this gave us our target.  My cousin devised a positive pyramid scheme that would allow us to get 1,000 women to take part in the mini marathon and if they each raised €200 it would enable us to reach our target.  One in 1,000 was born.”

“Since the start of One in 1000, over €1 million has been raised to upgrade facilities across the country, however more dedicated outpatient and inpatient CF facilities for both adults and children with CF still need to be developed. We really need women to rally behind this campaign to achieve this and I’m hoping that lots of people will get out and support this year’s One in 1000 on its 10th anniversary.”

The Vhi Women’s Mini Marathon takes place over a 10k course and is open to women of all levels of fitness, with participants having the options of running, jogging or simply walking the route. Cystic Fibrosis Ireland supporters will also have access to cloakroom facilities and food and refreshments on the day, as well as post-event party to celebrate their triumph!

The campaign comes against a backdrop of Ireland having the highest prevalence of cystic fibrosis in the world – with more than 1,400 people living with the condition in Ireland – and some of the most severe types.

Signing up for Cystic Fibrosis Ireland’s One in 1,000 campaign is easy – simply call Rachel on LoCall 1890 311 211, email rbyrne@cfireland.ie or visit www.cfireland.ie.