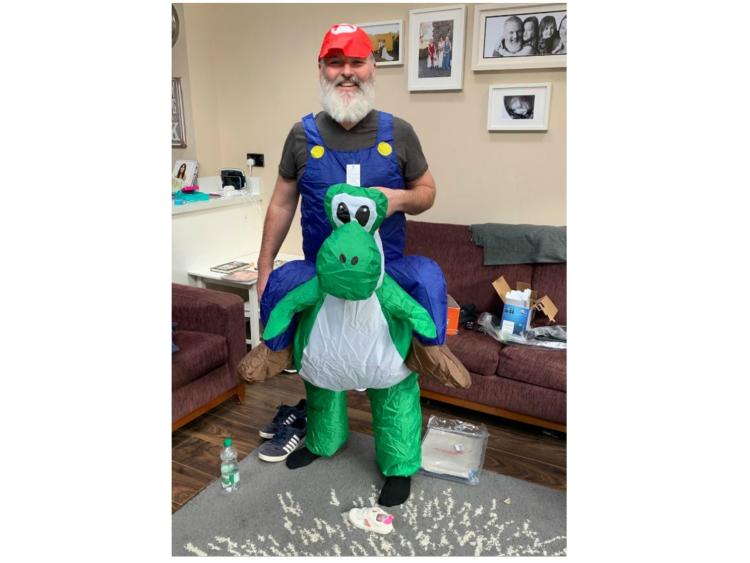 Ross Good in his Halloween costume

I think it’s fair to say that Halloween has to be the one holiday in the Irish calendar that has changed the most over the last 20 years. By and large, Christmas and Easter have always been exactly what they’ve always been. They’ve loosely stayed loyal to the original script. Santa and The Bunny do their thing and everyone smiles - credit card statements and monthly payees the following month aside.

They have certainly evolved over time, where toys and eggs have become more expensive, sometimes elusive, and 100% bigger in size - personally I think they have stayed more Peter Parker than Bruce Wayne if ya get me.

Halloween today is - and excuse the crappy pun here - a monster. It has become this hugely anticipated, quite expensive (compared to years back) and meticulously planned night which, if you think about it, actually only lasts a few hours at most.

The level of detail that houses go to is bananas. Same goes into the costumes for the young ones. They are a far cry from black bags we used to get with a belt slapped around your waist and a 99p plastic mask/hat if you’re lucky, I’ll tell ya!

Can you imagine sending your children out this Halloween night dressed like that and seeing how they fair out, like? Chances are they’d be ripped apart by the other kids. The world has moved on and Halloween in particular is the front runner. RIP the black bags, belts & gammy hats, that’s for sure.

In my opinion, it all stems from America. It’s a huge holiday over there; it’s so, so big. Over time - and via a combination of American TV shows being so readily available here along with the internet, not to forget a trip to the States is much more accessible/cost effective today just to highlight a few - it has definitely trickled down into our society today.

That and the use of the word ‘awesome’, but just because we can use it, doesn’t mean me should use it #pethate!

This year I’m going as Mario sitting on Yoshi. It’s a blow up costume I put my legs into which has a battery operated fan which blows the suit up and maintains it for the night. It was shipped in from China in record time (at a very respectable price I might add) but let’s boil it down here - a black plastic bag from Spar it ain’t!

So I’m not the biggest Halloween fan - can you tell?

Don’t get me wrong, it’s mega fun when you have children. Their excitement and anticipation of walking around the area all dressed up with the fun of bumping into their buddies in full costume is amazing. I love that and I love meeting all the other parents trying to figure out who the hell is who once dressed up.

But is it my favourite time of year? No. Compared to Christmas in particular? It really is not. Nowhere near it in fact.

I’m 41 at the moment and I’m definitely not an old fart, stick in the mud type but Halloween really was so much simpler back in the 80s. For parents, for children, for fireworks (maybe?!) and even for animals...wasn’t it though?

Thoughts, compliments or arguments on the back of a postcard please !