Longford Leader Farming: Can you lift the 3t cluster? 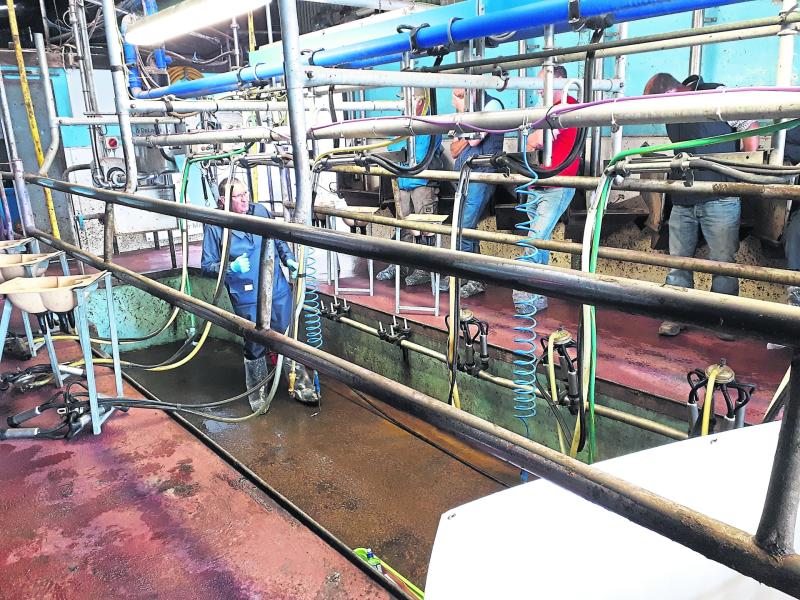 The routine job of milking cows can put enormous strain and pressure on dairy farmers. But how do the avoid injury?

Most dairy farmers milk cows twice a day, seven days a week for between 280 and 365 days a year.

Milking cows can take up to one third of a farmer’s working day. Tips, expert advice and new technologies on how to cut down on this time were on display at the final Smarter Milking event which recently took place.

The Smarter Milking event, which took place on the farm of Lakeland Dairies supplier Eugene Fitzpatrick in Co Longford, was organised by Teagasc, FRS, Animal Health Ireland and Lakeland.

The workshops have been running on farms across the country throughout July.

Padraig O’Connor from Teagasc gave top tips on how farmers can cut down on time spent in the parlour as well as making sure the farmer’s own health is maintained whilst carrying out the repetitive job of milking.

In particular, Padraig said farmers are presenting themselves with back and shoulder problems as a result of using the same arm when putting on the clusters.

“If you take a cluster at 3kg and a farmer has, let’s say, 100 cows that’s the equivalent of lifting 300kg at one milking. Then you double that because they’re milking again in the evening; that’s 600kg.

“We’ll be generous to them and say they’re doing 12 milkings (out of 14). That’s the equivalent of lifting 3.5t every single week on the one arm.

“It’s important that you switch hands. If the row of cows is on the right-hand side of the pit then have the cluster in your left hand. If the cows are on the left, then go with the right hand. We’re seeing lots of farmers with shoulder and back pain and all of this could be avoided,” Padraig explained.

He stressed that farmers “need to change their habits” when it comes to handling the cluster and it can take “as long as three to four or even five or six weeks” for someone to change how they have been doing the same routine for years.

‘Not compromising on quality’

Padraig outlined other tips and techniques which would help farmers cut down on the time spent in the parlour.

He said “get the machine ready before you go for the cows” so the cows are waiting to go into the parlour. It is critical for a farmer to have their gloves and apron clean and that it is “very, very important” to string out cows before they’re milked as this quickens the milk let-down process.

Padraig also said in a parlour with more than 10 units that a farmer should start from the front putting on the clusters once four or five cows come into the row and not to wait until the row is filled.

“All of this is designed to make it a bit easier in the parlour and quicken up what you do without comprising on the quality of your milk,” he said.