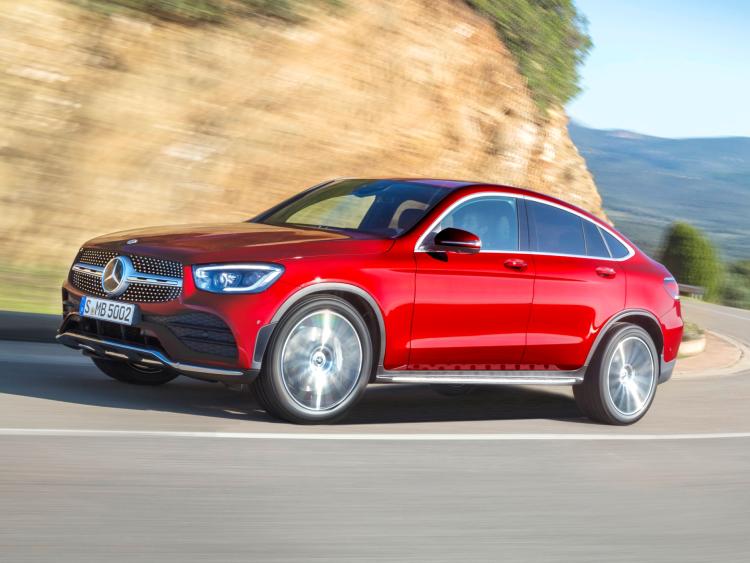 For those who follow such things, the pace of new model introductions at Mercedes-Benz is nothing short of breathtaking.

Since the new year, five new models have already arrived in Ireland, the B-Class, A-Class Saloon, GLE, CLA and the now-introduced GLC - with seven more wholly new and face-lifted models yet to come before year-end. Among them will be the latest GLC Coupé and AMG variants plus a mid-range trio of SUVs modelled to an extent on the larger new GLE which, itself, arrived here only weeks ago. Those to come include a new V-Class, GLS, EQC, CLA Shooting Brake and new GLB 7-seater which arrives in October.

Given a design and specifications upgrade in all departments, the new GLC, in its face-lifted form, is now arriving in dealer showrooms. First introduced in 2015, it is a model that occupies a pivotal position within a seven-strong family of Mercedes-Benz SUVs of which more than five million have been delivered to customers worldwide.

Distinctive Appeal
Said to be outstanding when driven on smooth tarmac and on rugged off-road tracks, this latest GLC comes with a new range of engines, pioneering technologies, a state-of-the-art infotainment system with larger touch-screen displays and enhanced connectivity.

Interior fitments include MBUX multimedia system and ‘Hey Mercedes’ whose functions expand with each model introduction. In the new GLC, an array of intuitive and versatile operating features that includes multimedia displays and augmented reality navigation can be managed by a combination of finger touch, hand movement and voice control.

For drivers with big distances to cover, one optional feature is a comfort control system that helps drivers and passengers arrive relaxed after a long journey. Driver assistance systems have been considerably expanded.

Included are distance, brake and steer assist features with automatic speed monitoring, an exit warning that alerts driver and passengers from opening a door when an overtaking vehicle is approaching, an emergency corridor function that helps drivers maintain course and avoid unintentional lane changing.

Wide Range
One of an even wider range that includes a GLC Coupé and a Mercedes-AMG 63 4MATIC model with AMG-specific performance, design and specifications – the new GLC comes equipped with next generation four-cylinder petrol and diesel engines, with more to follow later in the year.

Coupé and AMG Versions
Following the GLC in short order will be GLC Coupé and Mercedes-AMG versions. Bearing all of the driver-focused features and specifications found in the GLC, the Coupé is expected to have a strong following amongst motorists who prefer to combine the safety, efficiency and functionality of an SUV in a body design that exudes the sportiness and classic elegance that only a coupé has.

On the horizon also is a Mercedes-AMG 63 4MATIC version. Like all models that carry AMG designation, it will have all of the high-performance features and styling appealing to that sporty generation of motorists who revel in driving something that is distinctly different not least of which is a 4.0-litre eight-cylinder biturbo engine which generates 350kW (476HP) the Mercedes-AMG 63S 4MATIC generates 375kW (510HP) and a maximum torque of 650-700.