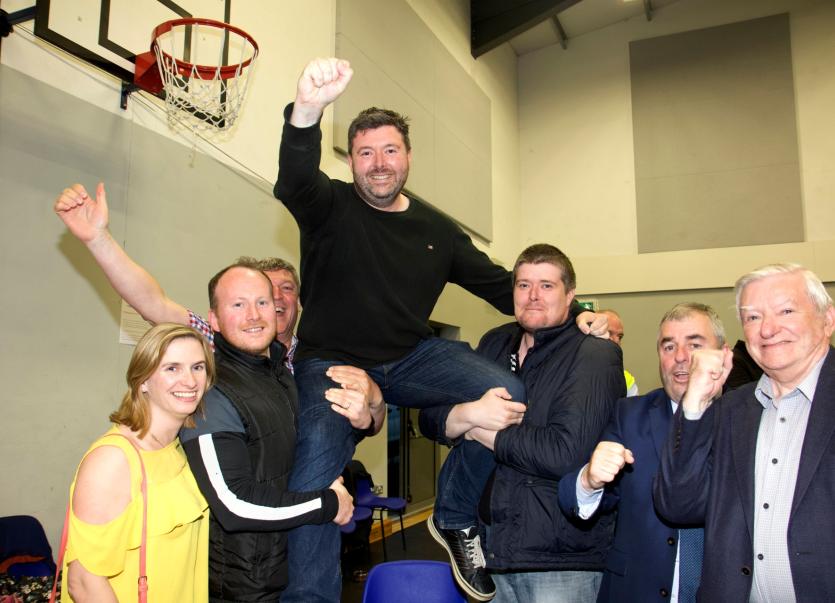 1. What's your idea of a perfect day or perfect weekend in Longford?

I’m a bit older now (if not much wiser!) and I love spending a Saturday with my wife and kids and doing a few bits with them! Sometimes we might ramble down to Moments for a bit of breakfast (and pancakes for the kids!) and after that maybe entertain the little ones with the park or the cinema (weather depending!).

Maybe then we’d head into to Davy in Take 2 or Lisa in Vocella’s for a bit of lunch and just chill and enjoy life! I do love a good BBQ and the grill is always out in Prospect Woods at the first sign of summer!

Now on occasion (wink wink), I’m a good man for the “sesh” and there’s nothing nicer than having a few scoops with the lads and putting the world to rights!! Yeah, I have pretty simple tastes, but my main enjoyment is having quality time with family and friends!

2. Who has made the greatest contribution to Longford in your lifetime - and why?

I’ve had the privilege of knowing many great people during my lifetime who have made enormous contributions to Longford whether through politics, artistic works or indeed voluntary vocations.

Many of these people are very high profile for their contributions on the national and international stages but for me I’m going to focus on local deeds and I’ll be perhaps a small bit biased in my selection, and that is for my father Christy Warnock.

My father was first elected to Longford Urban District Council in 1979 so I’ve basically grown up with this thing! All through his political career, until retiring in 2011, his principal motivation was his love for Longford Town and it’s people. He always rooted for the “little guy” and did everything he possible could to improve the lot of Longford and people who were in genuine need of assistance. He was an extremely competent and honourable politician with a strong unbendable principal and certainly could have pursued higher office should he have been driven by ambition, but he wasn’t!

He was one of the last of the “old school” public representatives who genuinely respected the trust placed in him by the people of Longford, and he honoured that trust by people focused representation rather than career focused. During my recent canvass, and indeed in the previous one, I was absolutely in awe and extremely proud of some of the anecdotes I heard of how he helped people over the years and how it had such a positive impact on their lives!

I can only hope to aspire to this in my own career! When he passed on the baton to me in 2011, his only advice was “Be straight with people! If you can do something for someone in genuine need, try your best, but if you know you can’t deliver be upfront about it! You will never be compromised if you tell people the truth!” It’s only as you get to know the world of politics that you see the wisdom of these words!

As anyone who knows me well will tell you, I have a brutal memory!! But, I do have fond childhood memories such as playing football in the green on St. Bridget’s Terrace, about 20 aside with jumpers for goal posts and the smell of bread coming from Whelan’s Bakery wafting over the green!

I remember my late mother used to send me up with 20p for a fresh batch, that was still warm and by the time I got it home to her it was half devoured from the outside in! I also remember that it always seemed to be sunny in Summer!!

Absolutely, great times in a better world I think but perhaps the same can be said for most childhood memories! I do remember the Longford Summer Festivals of the 1990’s and they were some craic! I’m really looking forward to the reinvented Summer Festival in a couple of weeks and I wish the committee and the businesses the very best of luck!

4. What's your favourite part of the county - and why?

I’m a thoroughbred “Townie” and to me, through its positives and faults, Longford Town is my favourite part of the county! I love the locals, the pubs, the shops and everything that goes with it! It may not be the most beautiful or trendy part of the county but it’s my home!

5. Do you have a favourite local writer or author (or artist or musician)?

Longford is awash with talent, and has been for decades! It is the home of literary greats like Goldsmith, Edgeworth and Colum. We are privileged to have talents like Paul Gurney, Valarie Nolan and countless others who we see perform on the local and national scene.

However, again I’m going to be a little biased! My top pick has to be my cousin Mick Warnock and Audio Pilot! Mick and the lads from Audio Pilot have been around for many years and I can attribute some of my fondest memories to their music, including my Wedding Day!

I genuinely believe that they are one of the greatest talents on the Irish Music Scene and are fantastic ambassadors for Longford through their national profile and their charity work. Looking forward to their next local gig!

One of the great positives of Longford Town is the quality local park amenities we have.

The Mall has often been described as “The Jewel in the Crown” of Longford and rightfully so! It’s probably one of the most beautiful parks in the country and a credit to the lads and ladies who have built and maintained it since it was gifted to the People of Longford by St. John’s Church Body, through the late Arthur Pearse.

I love the peace of the trail and the Camlin and there’s few nicer places on a sunny day! I also love the “hidden gem” of the Longford Royal Canal Walk and at Council Level have constantly impressed the importance of reinvigorating this amenity for the enjoyment of the people of Longford.

Thankfully, my pleas didn’t fall on deaf ears and to my great gratitude the Council Executive seen the value in my proposals and we successfully obtained significant monies for the regeneration of the trail. Work is ongoing, but for the first time in decades we now have water in the canal itself and works are due to commence shortly on a 5km loop of tarmac pathway which will open up the stretch to so many people for inclusive recreation. I’m very proud of delivering this for Longford and given the success of The Mall, it will hopefully be an enduring legacy.

7. What do you think gives Longford its unique identity?

I think the people of Longford, or indeed any place, is what creates a local identity.

I think the fact that we had/have to fight for everything tempers a never say die attitude in Longford People, and we have a habit of thriving under pressure. Never, has there been such an example of this than the Restoration of St. Mel’s Cathedral following the devastation fire in 2009. I deeply respect the way that this project came to fruition, and the people who made it happen including my councillor colleague Seamus Butler.

The symbolism of the Phoenix Rising from the Ashes, is inspirational in terms of what we as a community can achieve when put to purpose and under adversarial circumstances. It’s certainly something that inspires me in my work as a public representative and spurs you on to achieving other things for Longford.

It pains me to hear Longford getting bad press or being talked down, but when you see the quality of some of the people who roll up their sleeves and get involved for nothing more than pride of place, well that kicks the naysayers to touch!

8. What do you think is the biggest challenge facing Longford today?

If I’m honest, and I take no pleasure in saying this, it’s law and order issues and how the town and county is being perceived as a result of the actions of a very small minority.

I’ve just finished a canvass, and the single biggest issue on the doorsteps was antisocial issues! There are many very positive things going on in terms of job creation and regeneration, but unless we get to grips with the antisocial problems plaguing our community then all these noble efforts fall short in achieving the maximum impact we should be attaining for our people.

We as a community need to grasp this nettle and root it out as a matter of urgency, but we need to work together or we will achieve nothing. We as local representatives need to be at joint purpose and work with the local, and state, agencies to reclaim our streets from those who would destroy us.

9. If you had the power to change one thing in, or about Longford, what would it be?

This is a national issue, but I feel that we need stronger local government consistent with other European Countries.

If the Elected Members, the representatives of the people, had the resources and the relevant functions to address local needs without having to be so dependant on national government, then we could see real change! Every town and county have their own unique set of issues and I am a huge believer of having the ability to set our own course in accordance with the needs and wishes of the local people.

Unfortunately, the attitude of successive governments was for even tighter centralisation and local dependency on State Departments and unless there is a radical change in direction at national level, I fear we’ll remain plodding along for years to come!