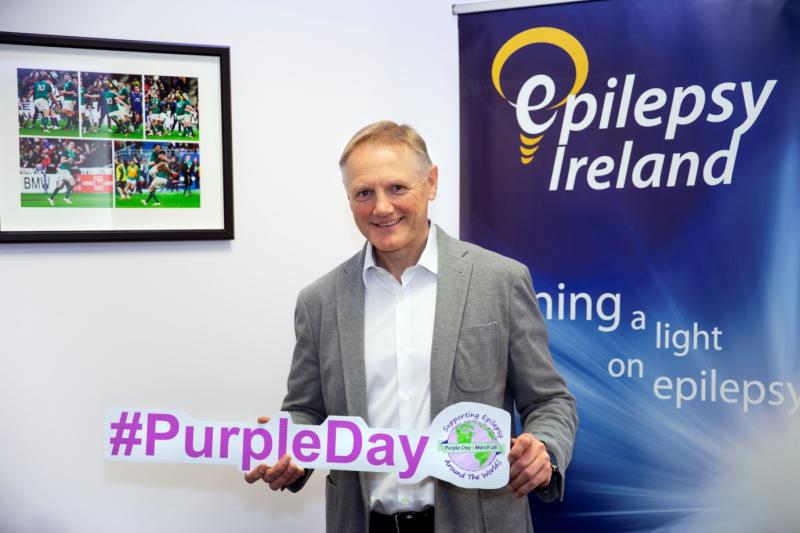 Epilepsy Ireland with the support of Joe Schmidt are promoting Purple Day this year
by encouraging buildings and businesses around the country to ‘turn purple’ to raise
awareness of epilepsy on March 26th. Almost 40 well known Irish buildings will show
their support for the cause including the Mansion House, UCC and Kilkenny Castle.
Purple Day was created in 2008 by 9-year old Cassidy Megan from Canada who had
recently been diagnosed with epilepsy and wanted to find a way to start a
conversation about her condition. From its beginnings at Cassidy’s school, the Day
has since become an international grassroots effort which is dedicated to increasing
awareness about epilepsy in over 100 countries. People are invited to wear purple
and host purple-themed events in support of the condition. The goal of Purple Day is
to dispel myths around epilepsy and to inform those with seizures that they are not
alone.
Peter Murphy, Epilepsy Ireland CEO said; “We are very excited about Purple Day
this year and really appreciate the support from the almost 40 buildings that will be
turning purple on March 26th
. The colour purple has been associated with epilepsy
throughout history and is internationally recognised as the colour that represents
epilepsy awareness. Epilepsy is to an extent a hidden disability that still carries a
social stigma and can have a major impact on the lives of people living with the
condition. Purple Day is hugely important as it raises awareness of epilepsy and
helps in removing the stigma and sharing the facts about epilepsy. We are very
grateful to everybody that will be getting involved with Purple Day this year and I
can’t wait to see all the different ways people will be supporting Purple Day in 2019.”
Totalhealth Pharmacies are also offering 10% discounts in all their stores to anybody
wearing a Purple Day wristband or with proof of text donation. Purple Day wristbands
are available from selected Totalhealth stores, from www.epilepsy.ie or from
volunteers around the country. Some terms and condition apply to this offer.
Text donations can be made by texting “Epilepsy” to 50300 and donating €2 to
Epilepsy Ireland.
100% of your €2 donation will go to Epilepsy Ireland. Some Network Providers apply VAT which
means a minimum of €1.63 will go to Epilepsy Ireland. Service provider LIKECHARITY. Helpline
0766805278
There are many other ways you can show your support for Epilepsy Ireland
and Purple Day:
• Share Purple Day themed social media content, for example post a photo of a
building lit up purple or of friends and family wearing purple using
#PurpleDay.
• Suggest a local or well-known building or landmark to shine purple for the
day.
• Hold a purple-themed fundraising event at your place of work or school to
support Epilepsy Ireland.
• Ask local businesses to help you promote Purple Day.
Epilepsy Facts:
• Over 37,000 people in Ireland have Epilepsy
• 1 in every 20 people will have a single seizure at some point in their lives
• 12,000 – 15,000 people in Ireland have uncontrolled epilepsy at any time
• Approximately 1,200 – 2,000 people are diagnosed with epilepsy each year in
Ireland
• There are at least 50 million people living with epilepsy worldwide
• Many famous people have had the condition over the years, such as; the late
singer Prince, the Dutch artist Vincent Van Gogh, 26th president of the United
States Theodore Roosevelt and Epilepsy Ireland patron DJ Rick O’Shea
Epilepsy Ireland is the national organisation supporting and representing people with
epilepsy, their families and carers. Established in 1966, the charity today provides a
wide range of support and information services from head office in Dublin and from
nine locations around the country, actively works to improve public understanding of
epilepsy and funds high quality Irish research into the condition.