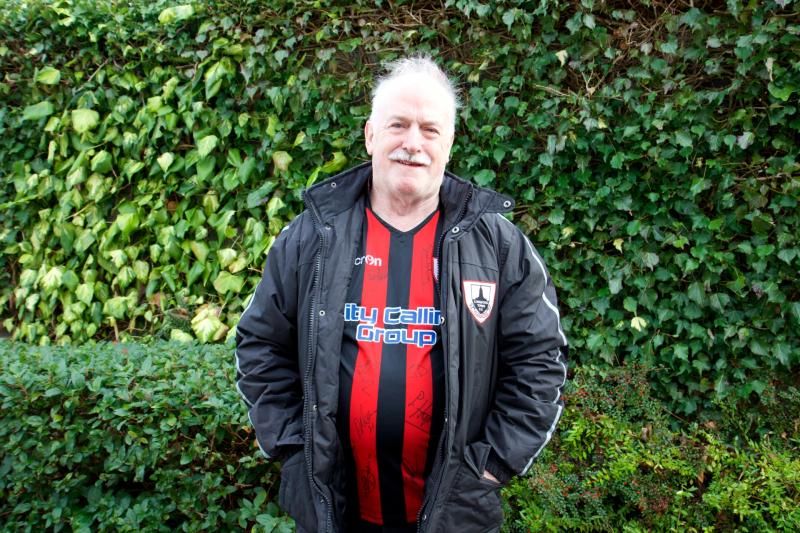 Donald Keogh is a true blue as they say and he is also probably one of the most popular sportsmen in all of Co Longford.

Born in Legan “a few years ago”, as he says himself, Donald recalls some wonderful memories of growing up throughout the 1960s and ‘70s.

There is little doubt that his passion for sport has always been to the fore, but his children and grandchildren are also a huge part of his life these days.

Donald travels a lot and admits that his association with Longford town FC has afforded him opportunities to see parts of the world that he may not have otherwise seen.

“I remember riding a bike to Longford when I was a young fella; everything was produced on the farm in those days too,” he recalls, before pointing out that he goes to Romania every year and it reminds him of what Ireland was like 40 or 50 years ago.

Donald has back trouble and it is for this reason that he travels to Romania annualy.
While there he gets mineral treatment for his ailments with the minerals coming from the healing waters of the local lakes.

And as you would expect with Donald Keogh, he has a very good friend in Romania too.
“My friend there has a small farm; everything you eat is coming from the farm and it is something else,” he smiles.

“It’s a real eye opener when you go over there to be honest. I come back feeling very grateful for my lot.”

Meanwhile, when Donald finished his primary education he entered St Mel’s College in Longford town as a boarder.

“You had to be tough that is for sure,” he laughs now before pointing to the fact that it “was the football that kept us all going”.

He played GAA at all levels for Legan, tried his hand at rugby and is now one of Longford Town’s biggest soccer fans.

“I played for Legan all my life; my fondest days were playing for the club,” he continues before recalling Andy Flood and his brother Nicholas.

“They were outstanding footballers; Andy was a great friend of mine.”

With Legan Donald Keogh played from junior up to senior level and was part of the many teams that clinched those much coveted league and championship titles over the years.

“We formed in 1966; I played with Ardagh for a year actually because there was no team in Legan.

“A couple of the boys decided to reform the club and a very good friend of mine TJ Ward, who was chairman for many years, kept the whole thing going really.

“Zac Hackett is a former manager and player and he had an operation the other day, so I want to wish Zac all the very best.

“Zac was a great footballer and when I brought him out to Legan, he won everything for us!

“His brother Ray who only died recently also came to Legan and he was another great. They loved the bit of craic and were great on the field.”

Donald says now looking back on a life well lived that the parish ethos associated with the local GAA club differs greatly to the soccer scene.

“Everybody rows in when it comes to the GAA, having said that though we have great people in the soccer club too, but the Parish thing is completely different to anything else.

“I have great memories of those times.

“I also have great memories of Longford winning the League in 1966 and then in ‘68 when they won the Leinster Championship.

“People say, ‘Ah Keogh is only a soccer man’ but I love sport and now I have grandkids playing football and soccer.”

He has been blessed - a fact he alludes to himself - with three grandsons and a little granddaughter, all of whom are the apple of their grandad’s eye!

“They have a huge interest in sport and I love going to the games to see my grandsons playing,” he smiles.

“It’s great for auld fellas like me to be able to go out and see their grandchildren playing football - it would do your heart good.”

Donald also points out too that these days there is an abundance of activities for youngsters whereas when he was growing up “all we had was the bit of football”.

“There is a schoolboy league being run by a committee up in Abbeycartron and those people are tremendous,” he continues.

“They are running leagues - a massive outfit - and I don’t know how they keep going, but they do!
Meanwhile, Donald Keogh played rugby for Longford as well!

“I only played it for a couple of years, I was never a great rugby player to tell you the truth but I won a couple of Leagues with the Thirds,” he recalls.

“Charlie Hall from Kenagh was the manager and he got men for that time and I don’t know where he got them from - he had a magic wand sometimes.”

Speaking to the Leader, Donald also recalls too his time working at Hanlon’s Ambulance Factory.

“We started a soccer team there and it progressed on to become Longford United,” he laughs, looking back with some nostalgia in tow.

“Then Longford United joined up with Longford town and we went into the League of Ireland in 1984.

He says they were great times for Longford Town FC and the people involved were remarkable.

“I often think of Derek Belton - he was a great lad; for a small county like Longford and for all that support then to be at a match supporting you - it was absolutely incredible, a massive achievement,” he continues, before pointing to the those wonderful travel opportunities that came his way.

“I’d say there isn’t a country in Europe that I haven’t been to and my visits to Eastern Europe stick out particularly for me.

“I have made so many friends through the League of Ireland; I even have a good friend in Serbia.
He loves the Lyons Tea so I send him the tea bags whenever I get a chance.

“I still go to a lot of the internationals; actually we were only in Cardiff recently.

“I have seen so much of the world and I wouldn’t have seen that were it not for the soccer.” Donald

Keogh is also ferociously proud of his native county.

He says there are great things happening here.

He is also in awe at the achievements of small communities across the board.

“I have friends all over the country and Longford is a great county; when we get Joe Flaherty into the Dáil we will be flying altogether,” he laughs, while admitting that he tries to stay away from the political scene!

“You could talk for a week about the amount of money that is being wasted in this country but I do think that now we are coming back out of the recession.

“And while there is a bit more money around, I’m not so sure that it is being used in the right way either…...maybe I’m wrong, but I don’t think I am.”

He also paid tribute to the many volunteers involved in Longford town FC.

“There is a crowd of lads in the soccer who are involved in the Car Boot sale and I want to thank them for everything they do for the club,” adds Donald.

“People are out there at 4 o’clock in the morning doing a lot of work to make money for the club and the amount of work that has been done at the clubhouse is thanks to them.

“Former committee member Jimmy Monaghan who passed away only a couple of weeks ago - he was a great man and a great friend of mine.

“There is a lot of people going too early too.

“Another person who I admire is Tiernan Dolan - he made so much money for GOAL over the years and he is always promoting the very best of Co Longford; he is a great man and has so much knowledge to boot.”

Donald Keogh also says that the Mullinalaghta St Columba’s team “are a credit” after securing their hat trick senior championship this year.

“Only 400 people in that parish - men, women and children must be playing football out there,” he laughs.

“They are remarkable that team; it’s one of the greatest teams ever to come out of this county - and they could win another three!!”.