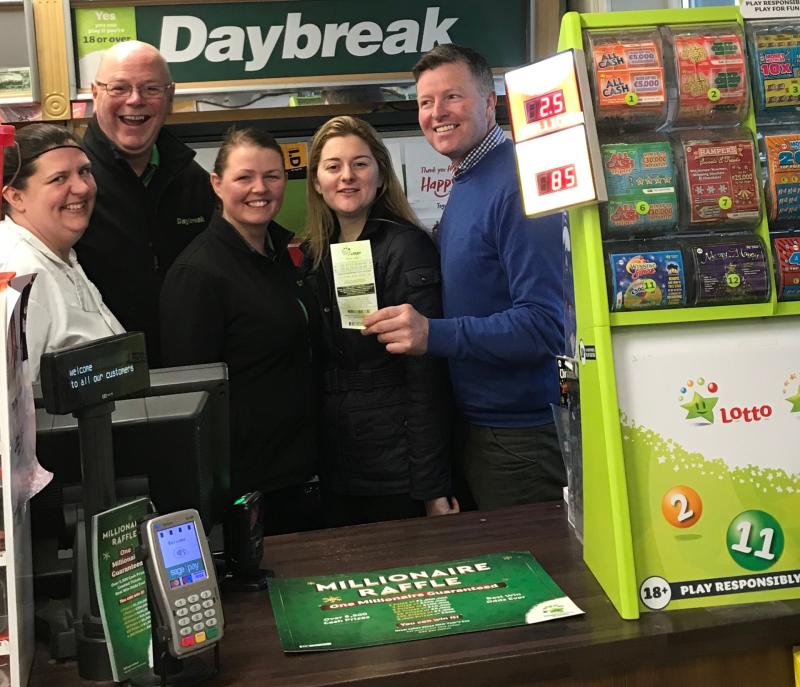 Excited staff in the Daybreak Store in Delvin, Co. Westmeath, today celebrating selling a Lotto Match 5 Plus bonus ticket worth more than 500,000 euros.

Player in Westmeath scoops incredible €516,688 after matching 5 numbers plus the bonus.

There was great excitement in Co. Westmeath today as a ticket sold in Delvin scooped a massive €516,688 for a lucky player - just on time for Christmas!

A delighted shop co-owner, Sarah Orme, said today there is huge excitement as news of the big win spread.

“We got the call from the National Lottery last night that we had sold a big winning ticket and as soon as we put it up on Facebook the place started buzzing! Customers coming into the shop today are full of chat and banter and speculation about who the lucky winner might be! Today is mart day in Delvin so anybody spending big on cattle will be fingered as the one with the lucky numbers!”

Sarah, who co-owns the shop with Paul Williams, said they hope the winner is a local but the shop and service station is located on the main N52 between Mullingar and Kells “so with a lot of passing traffic it could be anyone.”

Meanwhile the National Lottery has also  claimed its second millionaire from online play in four days with a lucky player scooping the top prize on Lotto Plus 1 of a cool €1 million on last night’s draw (Wednesday).

The National Lottery today congratulated the online millionaire on landing their big prize - just on time for Christmas!

A spokesperson confirmed the overjoyed winner has already been in contact with Lottery HQ to make arrangements to claim their prize, and to have the money banked before the holiday period.

“So far in 2018 we paid out €35.5M in prizes from online play, reflecting the growing increase in popularity of our online platform. Playing through lottery.ie or the National Lottery App offers convenience for participants of National Lottery games.”

In the 30 draws since the game change there have been three Lotto jackpot winners and five winners of the top Lotto Plus 1 prize of €1 million.  The total amount in prizes paid out across Lotto and Lotto Plus since September 1st now stands at €40 million – the equivalent of €1.3 million a draw.

Almost 30 cent in every Euro spent on National Lottery games goes back to Good Causes all over Ireland in the areas of sport, health, arts, heritage, culture, youth and community. Last year alone more than €226 million was raised for Good Causes or €620,000 a day.